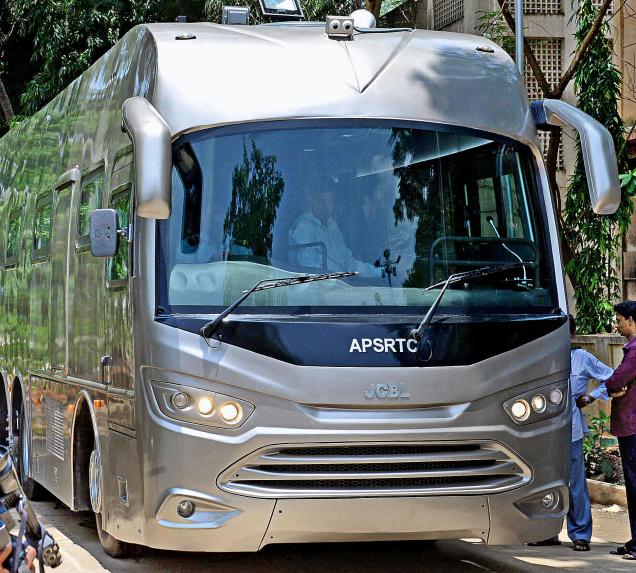 From now onwards this metallic-grey bus, which has arrived in Vijayawada, will use the bus office, bed room, when on tour. It will be transformed into war-room during emergencies like Hudhud. The flashy bus ,which brought to the CM’s camp office for his inspection, was special attraction in the city yesterday. He suggested some finishing touches. The bus will be decorated with government logo and with his themes of his projects.

According to official sources, the bus, which has 390 HP engine, will also keep watch on the people and road below. ” The bus is fitted with high resolution cameras on all sides to monitor suspected movements and one camera under the bus to keep watch on the road also. These cameras are connected to the security wing at the CM’s office though internet,” said the sources.
” The CM has suggested some minor changes to the interior. It will be kept ready in a couple of months. The CM can use the bus by Dasara,” sources said.

As Naidu started working from Vijayawada, the bus will be kept in Vijayawada RTC garage to make it available at short notice. The maintenance responsibility is given to RTC as it is the buyer of the bus.