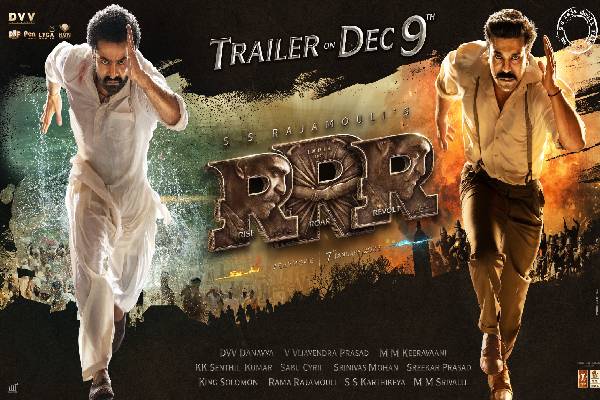 The big day for the country’s biggest motion picture RRR is finally out. The trailer of RRR was initially planned for release on December 3rd. The makers pushed the trailer release because of the sudden demise of Telugu lyric writer Sirivennela Seetharama Sastry. The makers today announced that the trailer will be out on December 9th at 10 AM. The makers are also in plans to screen the trailer in theatres across the Telugu states. The theatre list will be finalized and announced soon.

The film is carrying huge expectations and all eyes are focused on the trailer of RRR. The promotional content that was out in the recent weeks generated enough buzz on the film. NTR plays Komaram Bheem and Ram Charan will be seen as Alluri Seetharama Raju in this periodic drama that is set in 1920s before the independence. RRR is announced for January 7th 2022 release and SS Rajamouli’s team is chalking out a massive promotional campaign in the month of December.

#RRRTrailer out on December 9th. 🤘🏻