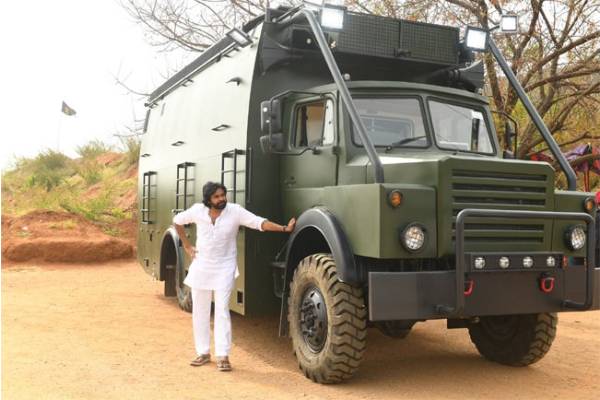 Jana Sena chief Pawan Kalyan had readied his vehicle for the 2024 election campaign. He named the vehicle as “Varahi”, a goddess who saves the world from evil forces.

Pawan Kalyan is also planning to launch a state-wide tour before the elections, and he is likely to use this vehicle. He initially planned to go on a bus yatra but differed for unknown reasons. He said he is required to know more about the people and their problems before he starts his yatra.

Now, he readied the vehicle which appears like a military vehicle, protected completely from all sides. The vehicle would have basic facilities for Pawan Kalyan to rest and ready besides holding key meetings with half-a-dozen leaders at a time.

He is leaving no stone unturned to defeat the YSR Congress and enter into the Assembly with at least 10 MLAs from Jana Sena along with him. He strongly believes that he would be able to win the elections only if he goes with the TDP and not the BJP.

It is to be seen what move he would make before the 2024 election bells ring!