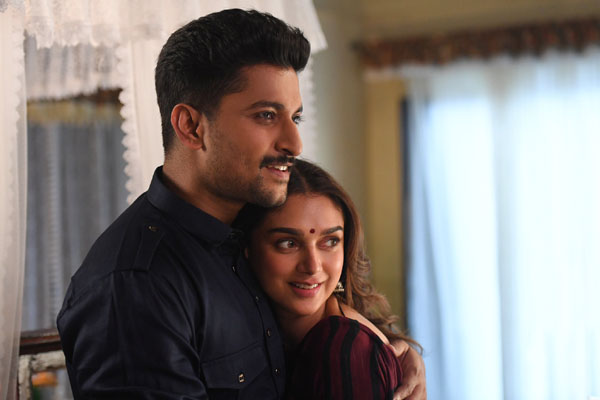 Nani is playing a cold blooded serial killer in the film V that is directed by Mohana Krishna Indraganti. The actor was presented in a de-glam look and he looked perfect as a serial killer. There is another shade of the actor that comes during the flashback of the film. Nani himself unveiled a click from the movie. He looked simple with a shaped moustache and hair along with Aditi Rao Hydari in the role. Nani plays an army officer and the flashback episodes are predicted to be the major highlight of V.

This backstory narrates the reasons why Nani turns a serial killer. Aditi Rao Hydari has a crisp role in V and it has prominence. Sudheer Babu plays a cop and Nivetha Thomas is romancing Sudheer in V. The film streams tonight on Amazon Prime and is carrying decent expectations. Dil Raju is the producer and Amit Trivedi is the music director of V.

‘Not long ago, he was like any of us’ @aditiraohydari I see you ❤️ pic.twitter.com/44QfCCJKij