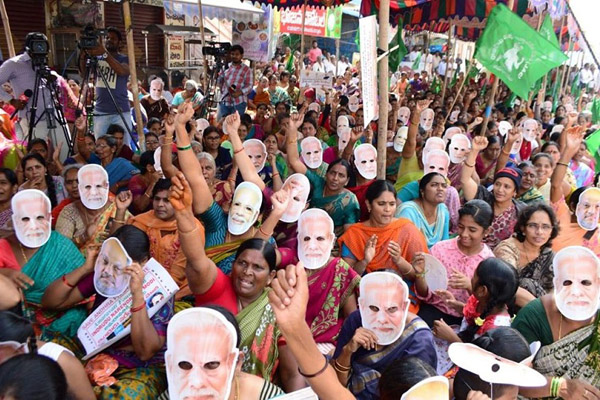 High tension prevailed in Uddandarayunipalem in Guntur district when large forces of police were deployed to evict the peaceful protesters who gathered at the tents that were put up near the foundation stone for the capital city of Amaravati which was laid by Prime Minister Narendra Modi exactly five years ago on October 22, 2015

Farmers and women took part in a padayatra from capital villages Rayapudi, Mandadam, Guntur to Uddhandrayunipalem, where the PM laid the foundation stone for Amaravati capital city.

Thousands of farmers from various villages in the area have gathered to protest against what they called the betrayal of the Jagan government on Amaravati capital issue. The farmers gathered at the foundation stone laid by the Prime Minister in Uddandarayunipalem in Amaravati.

The police forcibly evicted the peaceful protesters who held the green flags that have become the symbol of protesting farmers in Amaravati. The advance by police was swift and sudden. The protesting farmers of Amaravati got due permission from the police to gather at Uddandarayunipalem. As hundreds of police entered the protest area, the Amaravati farmers chanted “Save Amaravati.”

The police said another group owing allegiance to three-capitals gathered at the Amaravati foundation stone and raised slogans in favor of three capitals. The group was purportedly aided by the YSRCP leaders. “These are the actual paid artists. We are farmers from 29 villages and have been protesting since the last 310 days. The police clearly sided with the YSRCP group of protesters. This is a clear abuse of power,” said a farmer.

“The Jagan government orchestrated the protest led by the supporters of three capitals. This is a deliberate attempt to thwart the longest legitimate peaceful agitation of the Amaravati farmers,” said another farmer.

“We gave away more than 33,000 acres of our agricultural lands for Amaravati as capital. The protesters who came here raising slogans in favour of three capitals are paid artists and fake. They do not understand our agony and pain. We have lost our lands,” said another farmer.