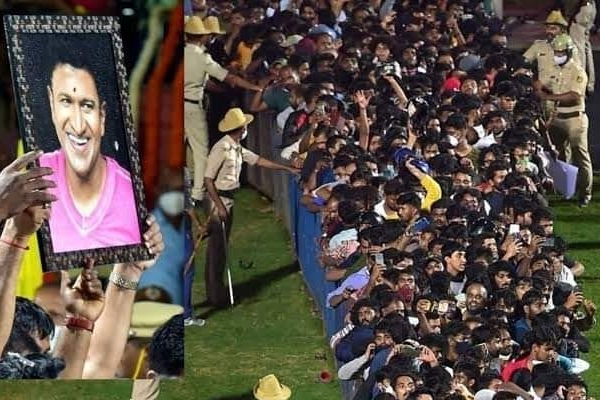 The family members have thanked the Karnataka government, police and fans for the well organised funeral of Kannada superstar Puneeth Rajkumar on Sunday.

Shivarajkumar, elder brother of Puneeth thanked Chief Minister Basavaraj Bommai for the arrangements. “I also thank the government, all departments and police for their cooperation,” he said.

Raghavendra Rajkumar, another sibling, stated that it was an appropriate decision by the government to not allow the procession of the fans. “We have seen violence and damages to public properties at the time of my father Dr Rajkumar’s funeral. We didn’t want this to happen. No one should get hurt,” he said.

Fans will be allowed only after “haalu-tuppa” ceremony (offering of milk and ghee to the deceased person’s grave). It will take some time. The decision will be taken after discussing with Chief Minister Bommai, he said.

“This is because, before the family members could perform these rites, fans themselves had done everything at the grave of our father Dr Rajkumar. Some had even dug up the grave. We don’t want this to happen this time,” he said.

Meanwhile, prohibition orders were clamped in the surrounding areas of Kanteerava Studio by Bengaluru Deputy Commissioner Manjunath until further orders. As many as 10,000 police personnel were deputed to maintain law and order in the city. About 10 lakh people visited and paid their last respects from Friday noon till the early hours of Sunday.

Shivarajkumar has appealed to the fans of Puneeth not to take any extreme steps and take care of their families. One person is reported to have committed suicide and two died of heart attacks following the untimely death of Puneeth Puneeth Rajkumar.