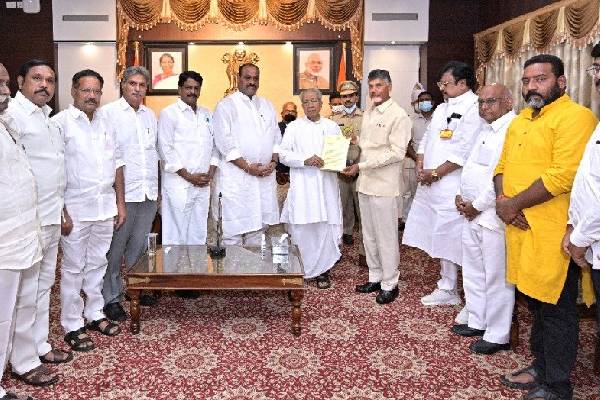 Former chief minister and TDP president, N Chandrababu Naidu, on Thursday stated that the bill to rename NTR Health University as YSR Health varsity has been introduced in the Assembly even without the knowledge of the Governor, who is the Chancellor of the varsity.

What is the need for the Government to bring in the legislation in such a hurry, he asked and said that TDP founder and former chief minister, late NT Rama Rao created history in the State by establishing Health University in 1986 to bring all the medical colleges under a common umbrella. The university has been named after the late NTR as he brought in radical changes in medical education, Naidu observed.

In the past 24 years, several thousands of students obtained medical degrees from the affiliated colleges to this university, he said and pointed out that of the 32 medical colleges in the State 16 colleges, including 3 private and five government institutions, were established during the TDP regime. During the three-and-half-year YSRCP rule, permission has been granted only to three colleges and the construction of these colleges has not been completed yet.

Stating that he has never seen such a Chief Minister like Jagan Mohan Reddy, who always utters blatant lies, the TDP national president said that Jagan has taken even the Assembly for a ride. Though the TDP struggled a lot to get the All India Institute of Medical Sciences (AIMS) , the Chief Minister did not bother to supply water to it, Naidu said.

Chandrababu briefed the Governor on the poor financial condition of the State and how cases are being booked against the leaders of the Opposition parties when they question the Government on public issues. He wanted the Governor to interfere in such issues as now Andhra Pradesh is witnessing state-sponsored terrorism. He also informed the Governor that already several complaints have been made on various issues.