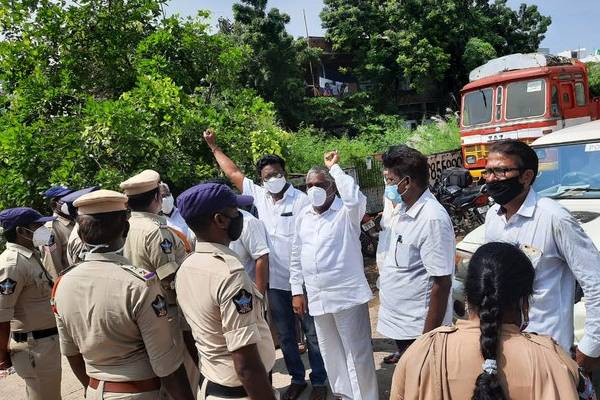 The Andhra Pradesh police clamped Section 30 and 144 of the CrPC in Konaseema region after the BJP’s ‘Chalo Amalapuram’ call to protest against the burning of the historical chariot at Antarvedi Sri Lakshmi Narasimha Swamy Temple.

All the roads leading to Amalapuram have been closed and barricaded. DIG Mohan Rao stated that there the police is not permitting anyone to participate in the ‘Chalo Amalapuram’ protest programme and appealed to the people not to go to Amalapuram. He also warned stringent action against those who violate the rules as per Section 144 and 30 of the CrPC.

Earlier, BJP vice-president Vishnu Vardhan Reddy was arrested last night in Amalapuram. The police have detained several BJP leaders and activists who were on their way to Amalapuram from Vijayawada. Security has been beefed up outside the residence of state BJP president Somu Veeraju and Kanna Lakshminarayana to foil their bid to participate in Chalo Amalapuram agitation. State party vice-president Ravela Kishore Babu, who is on his way to Amalapuram, was detained by the police at Hanuman junction in Krishna district.

BJP demanded the immediate release of those who were arrested in Antarvedi during the agitation against the temple chariot burning incident and lift the cases filed against them.