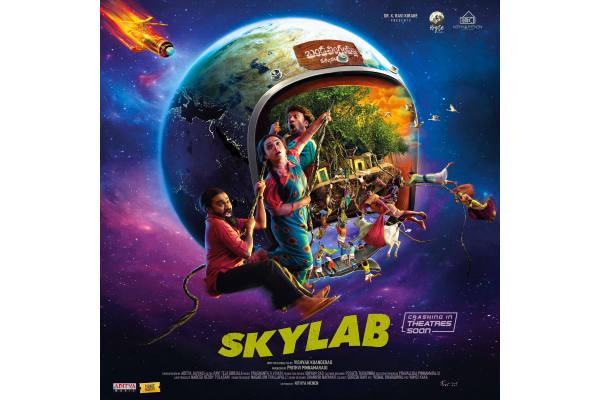 The makers of Skylab have released an interesting poster that kindles the curiosity of the audience and said the film will hit the screens soon.

“Let’s go on a dreamy ride to 1979, to the beautiful world of Bandalingampally! 🌌

#SKYLAB is crashing soon in THEATRES 🛰️”, they said.

According to the team, “The post production of the film is almost done and we are planning to release the trailer in this month. We have recently recorded with the prestigious Macedonian Symphonic Orchestra for important themes in the film.”

“The beautiful aesthetic of 1979 has been brilliantly captured and we can’t wait for people to see the world that has been created. The film will have a wide theatrical release, the release date will be announced in the coming days,” they stated further.

The movie is said to be based on the events that took place in the village of Bandalingampalli when SKYLAB fell from the space in 1979. The fun filled story revolves around Gauri, Anand and Ramarao.

The technical team comprises of Aditya Javvadi as the cinematogrpaher, Raviteja Girijala as the Editor and Prashanth Vihari as the Music Composer.