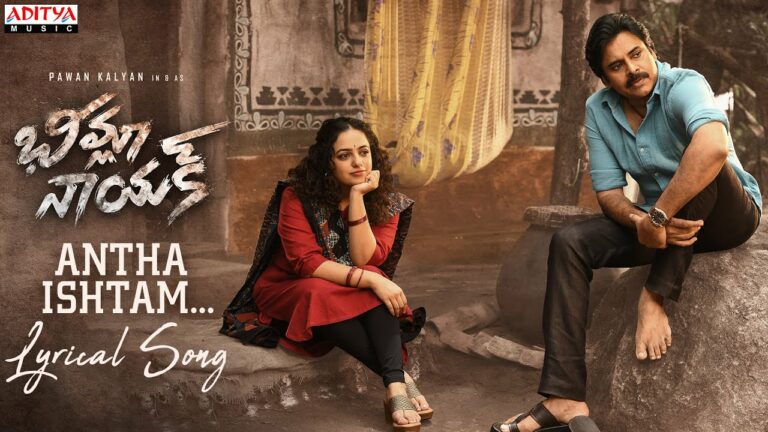 Bheemla Nayak is the remake of Malayalam film Ayyappanum Koshiyum and Pawan Kalyan, Rana Daggubati are the lead actors in this emotional entertainer. The teaser and the first single are smashing hits and the second single ‘Antha Istam’ is unveiled. The song is a soulful number and Thaman composes a melodious tune. Ramajogayya Sastry’s lyrics and Chitra’s vocals are the highlights of the song. Thaman composed one more super hit number for Bheemla Nayak and Antha Istam will appeal to everyone.

Antha Istam is shot on Pawan Kalyan and Nithya Menen and the song explains the pure bonding between them. The shooting portions of Bheemla Nayak are expected to be completed by December and the film releases next year. Sithara Entertainments are the producers and Trivikram penned the script of Bheemla Nayak. Saagar Chandra is the director and the entire film will be completed in Aluminium Factory, Hyderabad.

Rana packs a punch in his first glimpse from Bheemla Nayak 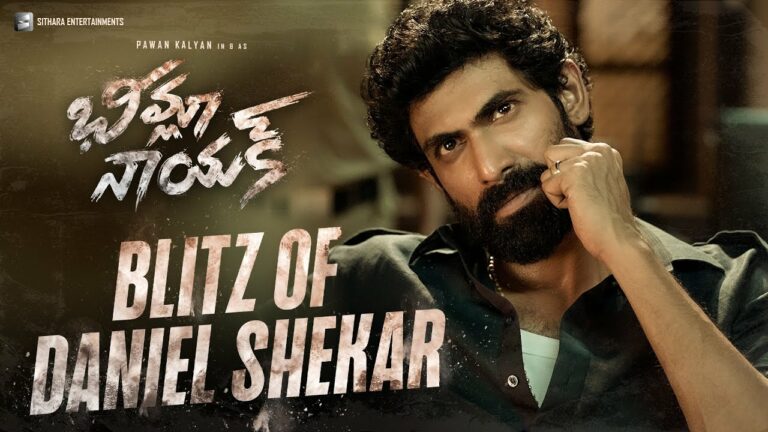 The first look of Daniel Shekar, the character played by Rana Daggubati in Bheemla Nayak, his first film with Pawan Kalyan, has been released.

Producer Suryadevara Naga Vamsi says the film s being made with great ambition and it will be released on January 12, 2022. The film which has screenplay and dialogues by Trivikram is direced by Sagar K Chandra.

The movie has camera work by Ravi K Chandran (ISC), music composed by Thaman S and editing by Navin Nooli. 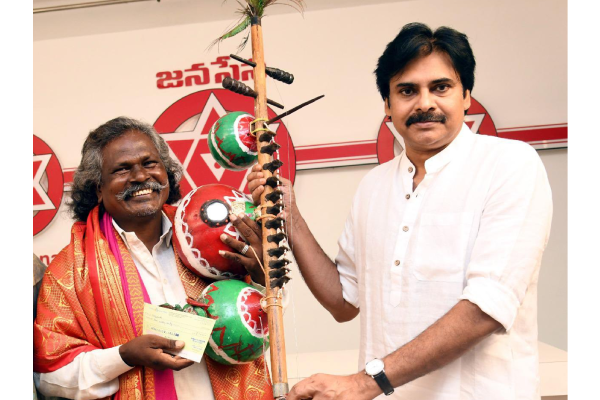 Pawan Kalyan handed over the cheque to Darshanam Mogulayya today and Janasena party released the pictures through the official twitter page. Kinnera is an ancient musical art of Telangana which is almost faded away and Darshanam Mogulayya is the only remaining Kinnera Maestro. Pawan Kalyan and Rana Daggubati are shooting for Bheemla Nayak currently. Directed by Saagar Chandra, the film releases for Sankranthi 2022. 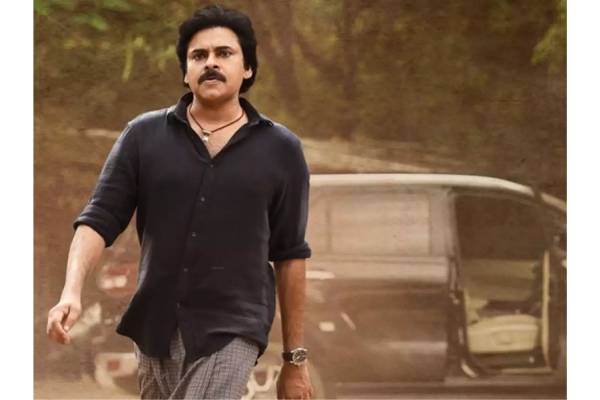 Marking the occasion of Powerstar Pawan Kalyan’s birthday, a song from his upcoming film Bheemla Nayak has been out. The lyrical video with local folk flavor raked more than 9M views in a day. Ramajogayya Sastry’s lyrics and Thaman’s music had left his fans in surprise. A few of the fans are disappointed as the song is not up to the mark.

Surprisingly Telangana DCP of East Zone, Hyderabad M Ramesh responded over the song lyrics and shared on social media about the lyrics and questioned lyricist Ramajogayya saying “whether he couldn’t find enough words in Telugu to describe the valor of a cop”. He said that there was no mention about the service of a cop.

Bheemla Nayaka is a remake version of Ayyapanum Koshiyum and Pawan Kalyan’s portrayal is a replica of Ayyappan Nair who respects the law and who will never break it. We have to wait and see what are the changes made for Bheemla Nayak and what made Ramajogayya pen those lyrics. Bheemla Nayak will hit screens for Sankranthi 2022. Saagar Chandra is the director and Rana Daggubati played the other lead role. 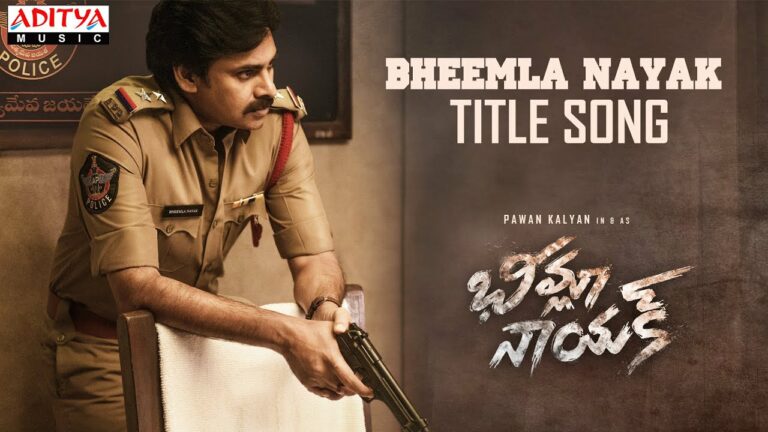 On the occasion of Powerstar Pawan Kalyan’s birthday, the makers of his upcoming movie Bheemla Nayak released the first single which happens to be the title number. Bheemla Nayak title song is a folk melody that is composed in a different style by Thaman. Bheemla Nayak title song is not a massy number but it will impress the fans and it could offer a treat for his hardcore fans. Ramajogaiah Sastry’s lyrics stand out in the song and they are rhymed well. The song bets on the characterization of Pawan Kalyan as Bheemla Nayak. Thaman takes a different path right from the music to the vocals.

The shoot is happening in Hyderabad and Rana Daggubati will be seen in the other lead role. Sithara Entertainments are the producers and Bheemla Nayak will hit the screens for Sankranthi 2022. Nithya Menen is the leading lady and Pawan essays the role of a powerful cop in the film. The shooting portions of Bheemla Nayak are expected to be wrapped up by October and Pawan Kalyan will resume the shoot of Hari Hara Veera Mallu from November. 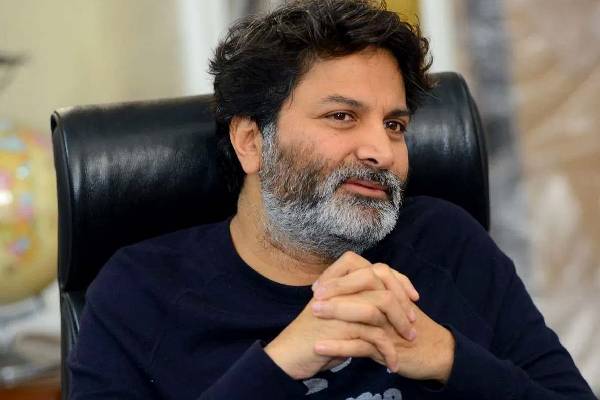 Top director Trivikram locked Superstar Mahesh Babu for his next film and the project starts rolling after Dasara. Trivikram for now is focused on Pawan Kalyan’s Bheemla Nayak and he is making his presence on the sets of the film on a regular basis. Trivikram shares a close bonding with Pawan Kalyan and the top actor wants Trivikram to finalize the scripts. Pawan has a lineup of films and Trivikram will now finalize the projects for Pawan.

Pawan and Trivikram are keen to co-produce his upcoming projects too. Trivikram has zeroed in a couple of young directors and asked them to come up with interesting scripts. After Pawan completes the current bunch of projects, he is keen to sign new ones and Trivikram took the responsibility. Trivikram is also keen to introduce a couple of debutants through his own banner which will be announced this year. 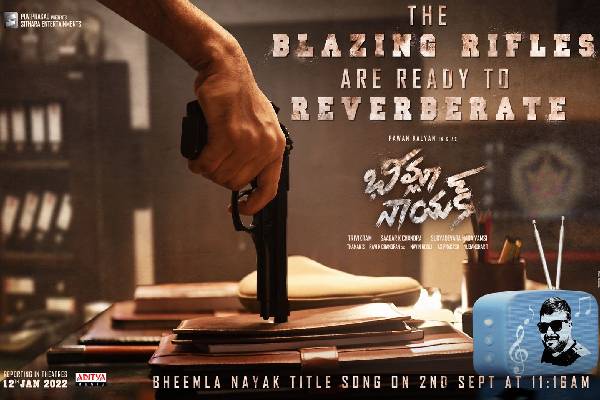 Powerstar Pawan Kalyan Fans are not yet out from the trance of ‘Bheemla Nayak Glimpse’, they are going to be treated with the film’s title song. The makers call the song the Power Anthem.

The song will be out on September 2nd at 11.16 AM as Pawan Kalyan’s Birthday Special. The announcement is accompanied by a poster release of a Police Station scene. The style of the Powerstar is enough to drive the fans crazy even though the star is not seen.

Naga Vamsi is bankrolling the film on a grand scale on his Sitara Entertainments banner. The movie directed by Sagar K Chandra is arriving for January 12th 2022 release as Sankranthi Special. Trivikram is involved in the project taking care of the screenplay and dialogues.

Bheemla Nayak is an official remake of the Malayalam Ayyappanum Koshiyum which starred Biju Menon and Prithivi Raj in the lead roles. Pawan Kalyan and Rana Daggubati will be the lead actors in the Telugu remake titled Bheemla Nayak and is directed by young filmmaker Sagar Chandra. Trivikram Srinivas is taking care of screenplay and dialogues.

The latest buzz is Trivikram is now ghost directing Bheemla Nayak. Almost 20 days of the film’s content that is shot in the past is scrapped. Trivikram is attending the sets regularly and is monitoring the output. Trivikram also made clear that he will start working for Mahesh babu film only after he completes the shoot of Bheemla Nayak.

Bheemla Nayak has got much hype with Pawan Kalyan’s Pancha kattu and his fans are waiting for the first song that will be released on Pawan Kalyan’s birthday. Nithya Menon and Aishwarya Rajesh are the leading ladies. Sithara Entertainments are the producers of Bheemla Nayak. 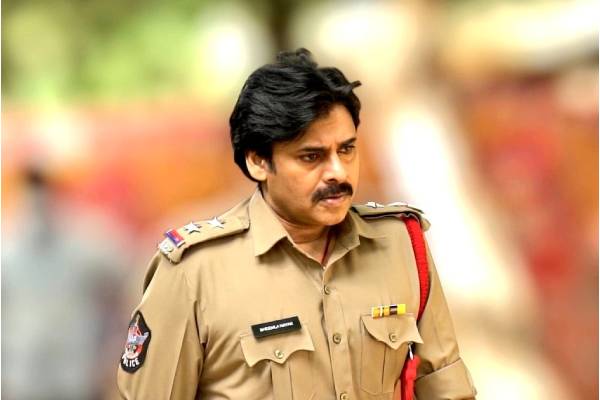 Telugu360 was the first to reveal that the prominence of Rana Daggubati’s role is reduced considering the stardom of Pawan Kalyan in the remake of Ayyappanum Koshiyum. The film is titled Bheemla Nayak and it happens to be the character name of Pawan in the emotional entertainer. The original has two balanced roles essayed by Biju Menon and Prithviraj Sukumaran. But Trivikram is focused on Pawan Kalyan’s image and mileage. The teaser is packed and Pawan’s fans are all excited about the film and thrilled with the presentation of Pawan as Bheemla Nayak.

There is a debate going on about Rana Daggubati’s missing from the teaser. The second half had equal importance for both the roles in the original but it is not going to be the same in Bheemla Nayak. Trivikram made enough changes for the second half. The makers never presented Bheemla Nayak as a multi-starrer and they are making it a Pawan’s film to balance the business equations. Trivikram is the mastermind behind the entire plan.

Bheemla Nayak is directed by Saagar Chandra but Trivikram kept a close watch on the rushes and the content. He penned the screenplay and dialogues for Bheemla Nayak. The film hits the screens on January 12th, 2022.