The Telangana High Court on Thursday directed authorities not to allow immersion of Ganesh idols made of Plaster of Paris in the Hussain Sagar lake here.

The court also imposed certain restrictions on immersion and asked authorities to build a rubber dam and take other necessary steps to check the pollution in the water body in the heart of the city.

The bench pronounced orders on a contempt petition filed by advocate Mamidi Venu Madhav for not implementing the court’s orders in the writ petition filed by him seeking a direction to restrain people from immersing idols made of plaster of Paris in Hussain Sagar lake.

The court ordered that immersion of idols made of paris should not be allowed in Hussain Sagar lake. It said such idols may be immersed in special ponds created for the purpose.

The court said instead of allowing immersion in the entire lake, the authorities should build a rubber dam to confine it to a limited area and after the immersion, the debris should be cleared.

It directed the authorities not to allow immersion of idols from Tank Bund. The immersion can be allowed from other sides like PV Marg, Necklace Road and Sanjeevaiah Park road.

The court also asked the authorities to take steps to make sure that devotees from far-off places don’t come to Hussain Sagar for immersion. They were directed to encourage immersion of idols locally and observed that devotees can immerse small idols in buckets at their homes.

The authorities were directed not to encourage idols made of materials harmful to the environment. The court also made it clear that authorities should not allow installation of idols on roads which block vehicular traffic.

The court also imposed restrictions on cultural programmes during the festivities. It said use of loud speakers should not be allowed after 10 p.m.

The bench also wanted authorities to ensure adherence to Covid-19 protocol during festivities. The authorities were directed to ensure social distancing and wearing of masks.

The 10-day long Ganesh festival is beginning on Friday. The festivities will conclude on September 19 with immersion.

Every year hundreds of idols are immersed in Hussain Sagar. Huge idols are brought to the lake in a mammoth procession which starts from Balapur on the city outskirts.

NGOs, environmental activists and eminent citizens have been voicing concern over the pollution in the lake and demanding curbs on immersion. 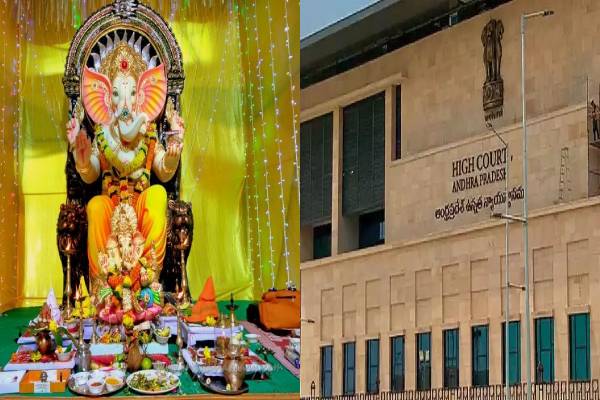 The Andhra Pradesh High Court has come in support of YSRCP government’s decision to impose curbs on public celebrations of Ganesh Chaturthi festival from September 10 to 19.

The AP government recently issued orders imposing ban on setting up Ganesh pandals in public places which created a furore.

The High Court issued directions on Wednesday (today) stating that there is nothing wrong in state government imposing restrictions on public celebrations in the wake of Covid conditions in state and to prevent Covid third wave.

However, the court directed state government not to impose restrictions on setting up pandals in private places.

The High Court allowed setting up of Ganesh pandals in private places and allowed five devotees at a time to perform pujas at pandals duly following Covid norms.