Puneeth Rajkumar’s James off to a Sensational Start 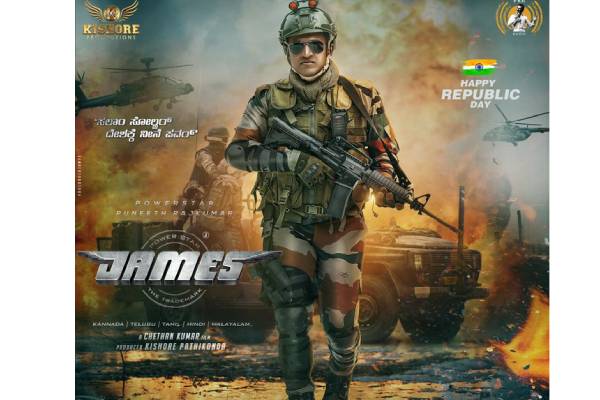 Kannada Superstar Puneeth Rajkumar suffered a massive heart attack and he passed away last year. His last film James released in theatres yesterday marking the late actor’s birthday. The Kannada theatres decided to screen no other film other than James and the film reported record openings in the state. Fans thronged to the theatres to pay their respect and show their love for Puneeth Rajkumar. His fans called James a celebration and the film reported positive reviews mostly.

The film released in 286 single screens and 180 multiplexes in Karnataka. Outside Karnataka, the film opened to low occupancy. In Telugu states, James got a grand release but the collections are limited. In Karnataka, James is expected to end up as the biggest hit in the actor’s career. The massy dialogues and the action episodes are the major highlights of the film. James will also have the advantage of the Holi weekend and will rake huge numbers.

The film is directed by Chethan Kumar. Priya Anand played the leading lady and Puneeth Rajkumar played the title role.

Kannada Superstar Puneeth Rajkumar passed away last year leaving the nation and Kannada film fraternity in deep shock. The makers of his next film unveiled the first look poster of his last film titled James. Puneeth Rajkumar is dressed in an army outfit and the poster comes with the backdrop of a battleground. Puneeth Rajkumar essays the role of a soldier in this action entertainer. Chethan Kumar directed James and the film is announced for March 17th 2022 release marking the birth anniversary of Puneeth Rajkumar. Except for a song and action episode, the entire shoot of James is completed.

The Karnataka film fraternity and the distributors of the state decided not to screen any film from March 17th to 23rd as respect for the late actor. All the theatres in the state would screen James. Both his brothers Raghavendra Rajkumar and Shivarajkumar will be seen in cameo roles in James. Priya Anand, Srikanth and Prabhakar Mukherjee will be seen in other important roles in James.