Switch to: తెలుగు
Home Tags King Of The Hill

Explained: VD’s ‘King of the Hill’

At the public meet of ‘NOTA’ in Hyderabad, sensational hero Vijay Devarakonda has announced that he is stepping into production and also revealed the logo of his production house.

It’s called the “King of the Hill” and that’s a strange label but it is explained why it is named so. Basically it is the surname of Vijay’s i.e, Deverakonda which is translated as it is in English. ‘Devera’ means King and ‘Konda’ translates as Hill and so it is named after “King of the Hill.”

Also the logo of the production house has a hill and on top of it is a King’s crown. That sums it up.

About launching production house, Vijay Deverakonda said, “The reasons are actually frivolous as there was no proper planning for setting up one overnight. It’s more about why not and why I should?”

The other reason Vijay revealed is during the making of ‘Yevade Subramanyam’ and ‘Pelli Choopulu’ not many people were ready to put even Rs 60 Lakh. “I know the number of rounds we made around producers and production houses. We did compromise to get things made and even after that to get it released is very hard,” added Vijay.

He further stated that now he is listening to good scripts and as a human, he can do only limited work, he would make with others and get them out of their misery. 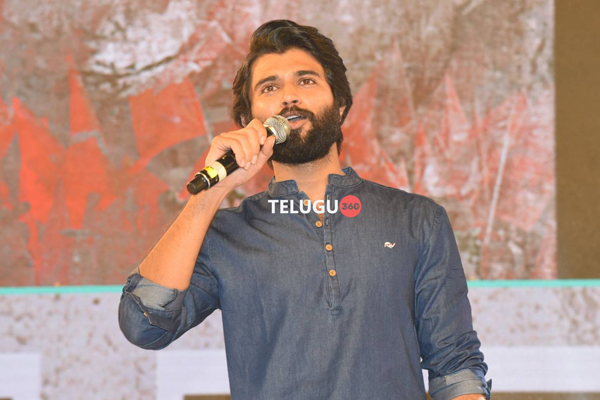 Hero Vijay Deverakonda has announced that he is stepping into film production and unveiled the teaser of his production house at the ‘NOTA’ public meet held in Hyderabad.

The production house is named ‘King Of The Hill’ and Vijay thanked producer Gnanavelraja for allowing to make this announcement.

Responding to the controversy surrounding ‘NOTA,’ Vijay said, “I heard few people have filed cases and affidavits to stall the release of ‘NOTA’ and alleged that the film is favouring a political party in Telangana. If the so called people have approached me, I would have revealed the truth,” said Vijay Deverakonda.

He added that ‘NOTA’ has nothing to do with political parties but it will definitely influence voters in a good way about choosing the right leader to give a better administration to the people.

‘NOTA’ will give new experience, quipped Vijay. The film is releasing on October 5th.