Tamannaah who made a comeback with F2 did not look back. The performance of the actress in Megastar’s Syeraa received critical acclaim and she is occupied with a bunch of films. Tamannaah was the first consideration for the recently released horror-thriller Raju Gari Gadhi 3 and she even attended the grand pooja ceremony of the project. But citing issues with her dates, Tamannaah walked out of the project. During the promotions of the film, the film’s director Omkhar and the lead actors reminded about Tamannaah.

During the promotions, they repeatedly said that Tamannaah walked out of the project though she participated in the launch. The team repeatedly used Tamannaah’s name which did not go well with the top actress. As the issue was settled without any controversies, Tamannaah feels that there is no need for the team to remind her name during the film’s promotions. Though the actress cited issues with her dates, the real reasons are completely different says the team.

Raju Gari Gadhi 3 released across the globe yesterday and it received a mixed response from the audience. 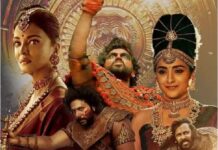