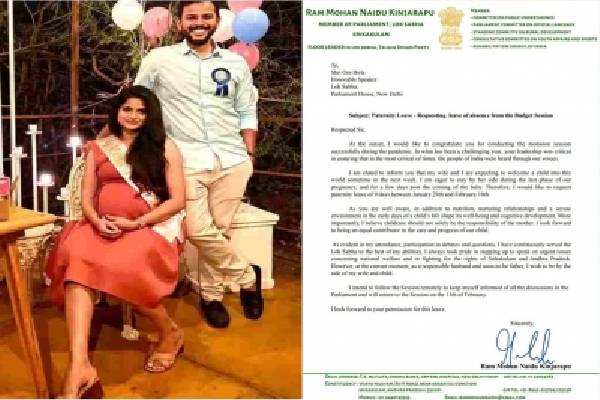 He wishes to be by his wife as she is expected to give birth soon.

“I am elated to inform you that my wife and I are expecting to welcome our child into this world sometime in the next week. Therefore, I would like to request paternity leave of nine days between January 29 and February 10,” wrote Naidu.

As his wife is in her last trimester, Naidu said he is eager to be by her side for a few days after the birth of the baby as well.

“In addition to nutrition, nurturing relationships and a secure environment in the early days of a child’s life shape its wellbeing and cognitive development,” he said.

The TDP leader also pointed out that childcare should not solely be the responsibility of the mother and said that he looks forward to being an equal contributor in the care and progress of his child.

He also cited his Parliament track record and reminded Birla that he attended regularly and participated in debates and questions.

Naidu said he will follow the Parliament sessions remotely to update himself on the discussion and developments, and promised to return to the Lok Sabha on February 11.

The MP concluded the letter saying he would look forward to Birla’s permission. However, there was no mention of the date of writing this letter.