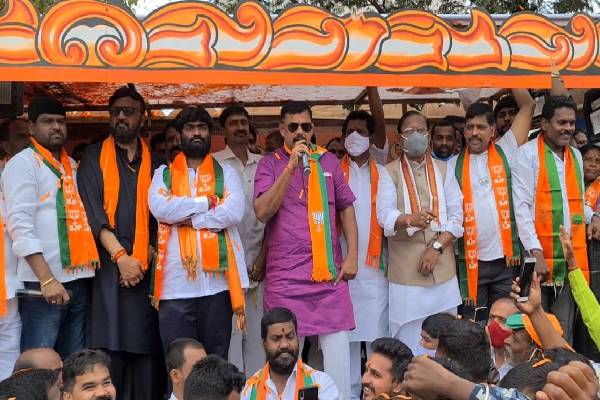 Raja Singh, BJP MLA representing Goshamahal Assembly constituency raised his pitch against his arch rivals – the Owaisi brothers.
Calling the brothers “diaper babies” hiding in the safe haven of the Old City, Raja Singh questioned what were the Owaisi brothers doing when hundreds of Muslim women were sold to old men from the Gulf in the illegal marriage racket. “Not a single Hindu woman was ever was sold in such illegal marriage transactions. What did the Owaisi brothers were doing when our Muslim daughters, when our Muslim sisters dignity and respect was being sold away to men from Gulf. They are daughters of Telangana. What did the diaper babies do when our Muslim daughters were being sold in marriage market,” he questioned.
He said the BJP is not against Muslims, but against terrorism and terrorists calling them “terrorist dogs.” “We don’t hate Muslims. We are against terrorists and illegal immigrants who are involved in terror acts in the country,” he said.
Further, Raja Singh claimed that the Owaisi brothers and their AIMIM party lost credibility in their own bastion – the Old City.
“Muslim women are chasing away MIM party leaders with broom sticks when they are going to their doorstep seeking votes. Such is the credibility they have in their own constituency,” he took a jibe at Owaisi brothers.
He said in the last more than 15 years, the Old City remained backward only because of AIMIM and its party’s main faces – the Owaisi brothers. “We have seen what happened to the Old City when the torrential rains and flash floods hit Hyderabad. The only language that the Owaisi brothers know and understand is the language of hate by keeping the Muslim brothers in a constant state of darkness. All that they know is whip up their passions. But Muslims have realized their ulterior motives and keeping MIM away,” he said.
On Asaduddin Owaisi challenge to Prime Minister Modi to visit the Old City, Raja Singh said the AIMIM president tried every trick in the book to stop UP Chief Minister Yogi Adityanath’s visit to the city but proved futile. “He met the DGP. He moved heaven and earth to stop Yogi Adityanath ji’s visit to Shalibanda. Now, your baap (father) has come. Stop him. You are scared like a rat hiding in your hole at Adityanath ji’s visit,” he said.