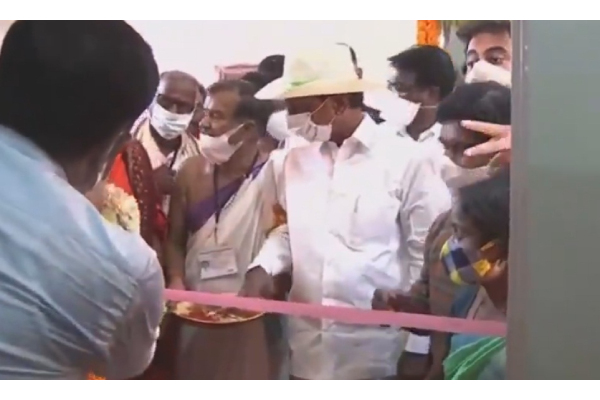 Apparently irked over the delay by officials in arranging scissors at an inauguration ceremony, Telangana chief minister K. Chandrasekhar Rao pulled off the ribbon from a door.

The incident occurred on Sunday in Rajanna Sircilla district but came to light after a video went viral on social media.

The chief minister was in Mandepalli village to inaugurate double bed-room houses built under the state government’s dignity housing scheme for people below poverty line.

Accompanied by a couple of priests and beneficiaries, the chief minister reached the entrance of a house to formally inaugurate it by cutting the ribbon. However, the scissors were not available. He enquired about the same and was looking around for someone to quickly bring it. After waiting for about 20 seconds, he pulled off ribbon from one side to complete the formalities and led the beneficiaries into the house.

The video has since been shared widely on the social media.

The houses have been built in an area named after KCR, as the chief minister is popularly known. A total of 1,320 houses were built at a cost of Rs 80 crore. In the five storied building, each flat has 560 square area with two bedrooms, common bathroom, hall, kitchen and attached bathroom.