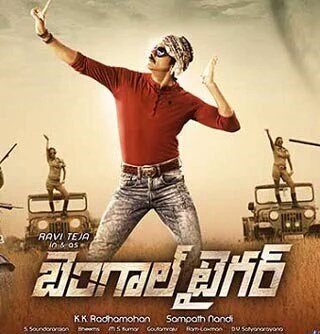 Mass Maharaja Ravi Teja’s upcoming action entertainer, Bengal Tiger, is getting ready to hit the screens very soon. The latest update is that the patch work and the entire post production has been wrapped up. Initially, the makers had planned to release it on November 5th, but the latest reports reveal that the film is going to release in the last week of November. The official date will be out in a few days.

The audio was unveiled recently and the electrifying trailer has phenomenally raised the expectations on the film. Racha fame Sampath Nandi is the director for the film. Touted to be a full length action entertainer, Bengal Tiger has Tamannaah and Rashi Khanna as the female leads. Bollywood actor Bommani Irani plays an important character in the film.

Bheems Cecireleo is the music director for the film. KK Radha Mohan has produced the film under Sri Sathya Sai Arts banner.