Switch to: తెలుగు
Home Interviews Interview : Pearle Maaney – A ‘pearle’ of a talent 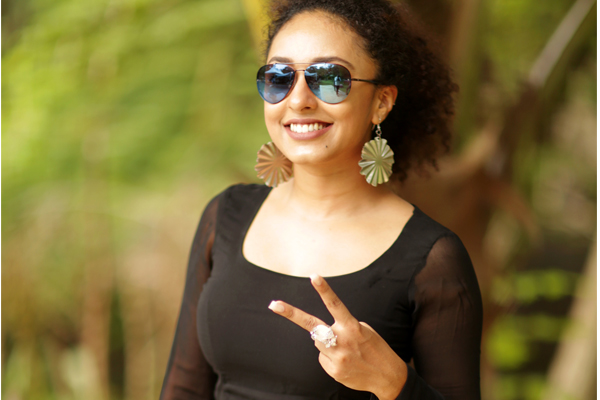 Before we talk about Pearle Maaney, there’s an interesting little backstory associated with her name. She sports a Kangana-like curly hair, having a love-hate equation with it. Pearle has been a VJ in the past and has served as a television anchor for a number of shows. Google her and the name biker girl is what you immediately recognise about her. She is happy with that too. Also acting in five Malayalam films to date, she’s now gearing up for her entry into the Telugu industry. Interestingly, she reveals acting is not her passion but being a motivational speaker is. Sharing her diverse set of experiences to Telugu360.com, here’s an exclusive conversation that promises to peep more into a unique personality.

Pearle Gate means gate to heaven and that’s how they came up with it. Also, my dad’s eldest sister’s name was Pearle. I was just four months old when she passed away with cancer and at that time she wanted me to be named after her. She was a brilliant dancer and worked in movies, small roles in Tamil cinema and she lives on through me. Dad often says had she been alive, she would have been proud of me.

On curly hair and straightening

My curly hair is from my great grandmother (paternal). It skipped two generations and came to me. The reason for my late entry was my interest to go for media studies and did not want to be distracted. Soon after, I wanted to do something different. There were a lot of people asking me to straighten my hair for the films and do films I didn’t feel like. Curly hair does give me a distinct identity but when you are playing a role and if the character is really challenging, I will straighten it. I had temporary straightening before which didn’t work on me but I am cool with that.

Motivational speaking and travelling with dad

My dad is a motivational speaker, and I travel along with him around the world. Every time, when the show is over, people approach him, appreciate and thank me. When the show starts, they are serious and once it is over, they are relaxed. I see happy people, becoming relaxed like children, holding his hand and saying thanks. It is like lifting the weight out of their heart. There are CEOs of companies and others too. I want to do that – make people happy. I derive energy out of making people happy at the end of the day. Earning lot of money is not the goal and I noticed that a lot of rich people are not happy. Acting has never been my passion. My aim has always been to become a motivational speaker.

On how, the motivation is spread across several age groups

I want to be happy and money will follow. I want to start training from the school level. Children are the one who can be helped the most. My dad trains at every level, school, college. There are 2 kinds of training, one that gives you the fish and the other that teaches you to do fishing. To teach people to do something is helpful, it is about spreading the light rather than showing the light. We make them believe in themselves and we do the follow up. When you do it with a clean purpose, you will find the way.

If you love something you will find time for it…be it bikes and cars I love going for a spin. I find time for it. Be it midnight I take time and go out with the bike. My mom is getting used to it now. I actually needed my mom’s permission to act, she is paranoid and I had to convince her initially. In the first film, she said if I love the script I should go ahead. The first film I was a biker and got good reviews and I got many offers after that and I was flooded with biker roles. I didn’t take them all. I was looking forward to doing something different and then Last Supper happened. I play a journalist who is losing her friend. There are two friends and I take them to a forest. I am making my debut in Tollywood with Nandini Reddy’s Kalyana Vibhogame.

The prospect of learning different languages

I studied Malayalam till the tenth standard. Telugu is pretty similar to Tamil and there is a mix of Malayalam too. It has different meanings but the words are the same. Marchipothunnav is died in Malayalam and in Telugu it is to forget. They are same words but have different meanings in two different languages. Learning was funny and interesting. I got this film on my birthday. My friend called me and said there is a shoot happening tomorrow and it was difficult to believe. Especially, because usually they call way ahead. When I went there and saw the shoot happening, I was still thinking why would they take me. It took a while to register. I play a wild life photographer, a free bird in this film. I really like the whole experience of working in a Telugu industry, it is very professional and there is lot of love. Hyderabad is an amazing place too, the people and the food, everything….