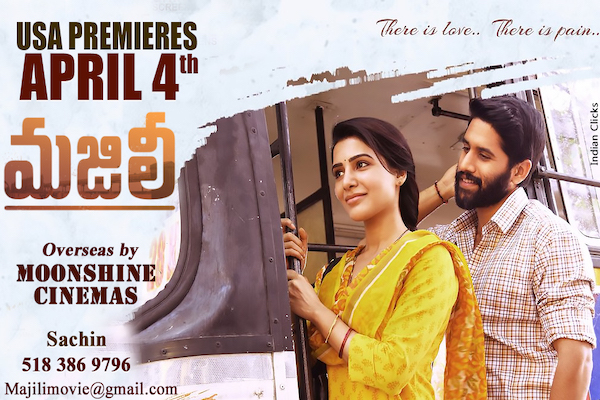 Moonshine Cinemas, an Overseas distribution company is excited to announce its next project of Yuva Samrat Naga Chaitanya and Samantha’s Majili which is Slated to release on April 5th as Ugadi Special & Overseas Premieres on April 4th.

Overseas Audience are eagerly waiting to see the Blockbuster Combination & real life couple on the silver screen once again in the direction of Shiva Nirvana who directed a heartwarming film like Ninnu Kori previously.

Gopi Sundar who is known for scoring soothing music is composing tunes for this film while Vishnu Sharma cranked the camera.

Shine Screens Banner is Bankrolling this Project. The Promotional Material of the film released by the makers so far is very exciting.

‘Majili’ Teaser that released today offers both ‘Love & Pain’ in right quantity and promises a romantic entertainer with loads of emotions.

Moonshine Cinemas is releasing the movie in the entire Overseas. USA Premieres are planned in record number of Theaters in Naga Chaitanya career. Theater list will be announced very soon.

Moonshine Cinemas would like to thank Producers Sahu Garapati Garu, Harish Peddi Garu and Hero Naga Chaitanya Garu for giving us this Opportunity.

For exhibition rights in USA & Rest of the World. Please contact us: