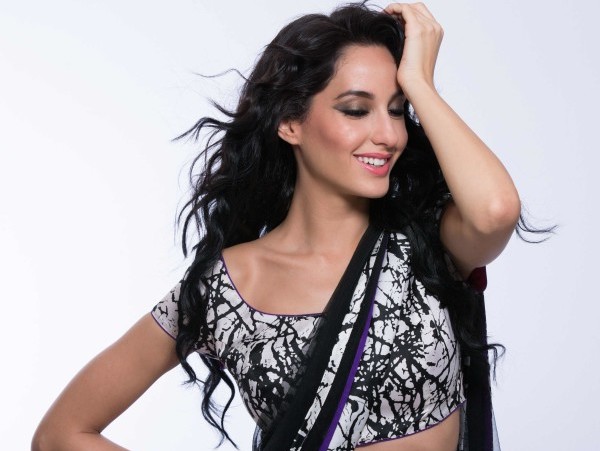 The Canadian model Nora Fatehi is on a roll. Starting her career with a brief appearance in the Bollywood film Roar, she embarked Telugu cinema matching moves with Jr NTR in Temper. Then Manohari, the number in Baahubali happened and life for her just wasn’t the same. She got to know that doing special numbers, as she prefers to call it, is beyond skimpy costumes and has scope for good expression too. Not quite bothered by advises coming to her side to give up on song appearances, she shall be seen with Ravi Teja in Kick 2, followed by Kalyan Ram in Sher. She’s having a ball being busy, embracing the Indian recognition and slowly graduating into the ‘big’ thing in Tollywood. Here’s her exclusive conversation with Telugu360.com

How does it feel being repeated in big movies?

I’ve just signed a Bollywood film and I can’t divulge any details at the moment but the makers promise to do so in December. I surely feel it an accomplishment and don’t like it to be called item songs and feel better when they’re special numbers. I emphasise less on the item part and begin reflecting on my ability to dance in a big way, rather than wearing skimpy outfits and oozing sex appeal. It is very easy to do a song and disappear and they want a new girl for every film. It feels really good when you get repeated in all the big films in a short time. Many people are saying, bas ho gaya, don’t do any more songs, but if something is working for you why not do it?

You want to continue with item numbers?

I speak to lot of people in the industry and they say when the minute you stop doing what’s working for them and try something else, it’s over. It’s too early in my career to make such decisions. If I like a project, I don’t see why I shouldn’t do it. The best example is, when I was approached for Baahubali, people were saying me not to do an item song again. There were three girls but I went with my gut feeling. After seeing me, in 3 minutes, people started calling. No one called me as much as they did even if I had done lead roles. In quality and big films, even if you get noticed for 5 seconds, it is very gratifying. I liked the costume, the look and the make up in Manohari number which was good and clean.

Where did you see the film?

Last week in Canada, I thought let me see if the film is running here and went with my friends and the show was housefull. When we walked out, I noticed that the crowd was Indian and there were foreigners too who watched the film. I watched the Hindi film with sub titles and felt really happy for India and Indian cinema in general. I felt really happy that we are getting noticed. For me, the Telugu version of Manohari was better than the Hindi version. We shot for Telugu and Tamil, switching for each shot for the other language for 6 days. My friends called it an illusion and beautiful choreography.

How was the response?

The Hindi film I am shooting now in Hyderabad is what I have been offered after Baahubali happened. You will realise it is also big when I reveal the details soon. At the sets, people were approaching me for autographs, it felt so rewarding. When they say your expressions were good and you did a good job, you realise the skill actually matters over looks.

How do you maintain your figure?

I do a lot of belly dancing. I was so fond of it that I would teach myself and others despite not being technically trained. I am obsessed with it everyday and practise it if in a good mood with the music full on for 2 or 3 hours. In the gym, I teach models and aspiring actors and it helps me improve. Most of the dances I know is what I picked up from many years of observation when I was living in the Arab, Indian, Black community. By observing and copying, I got hold of a mixture of Caribbean, Hip Hop and Jamaican, Arabic dancing but the expressions are very Indian. Yesterday, friends were making fun of me that I was eating rice and butter chicken. You just get hungry when you dance for long hours. If someone interferes in my diet regime, I get very aggressive. I don’t like being thin and prefer a chubby look.

Your next project?
My next release is Kalyan Ram’s Sher, a nice song, one in which I really look great. Kick 2 has me in a very energetic number with the choreographer Jaani, the man behind the number Cinema Chupista Mama that had Allu Arjun and Shruti Haasan. When I’d seen that, I was shocked to see it was so intricate and fast and thought one day I should work with him. When I actually got the opportunity, I felt very happy. He never gives girly moves to the girls just because of the gender. He gives rough, hard core moves. Meanwhile, expressions, we handle it as no one has time to listen to you on the sets. It happens like this, coming on sets, putting the make up on and costumes and learning the moves before the shot. Even for Temper, there were no rehearsals and time to practise the lyrics or listen to the song. Only time I had was for Baahubali and got two days time. I get very pressurised but what to do? You want to do something and give your best