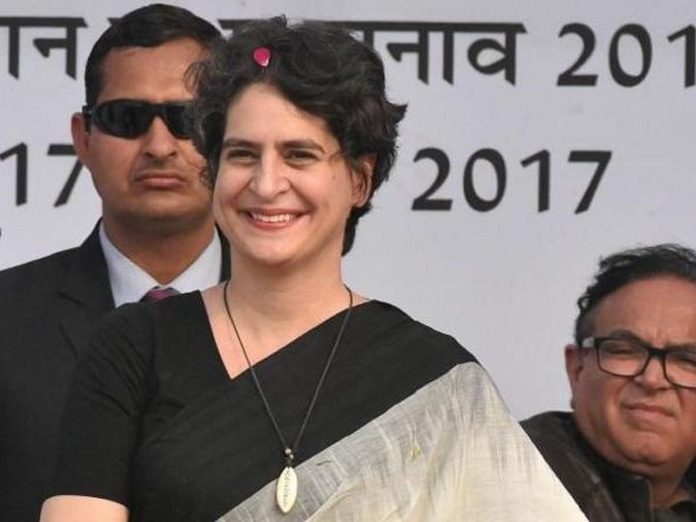 Shortly after the Congress party announced that Priyanka Vadra would be the new general secretary of the Grand Old Party holding charge of eastern Uttar Pradesh, it put out a photograph of Indira Gandhi playing with a young Priyanka.

The Congress is not holding back on the central theme behind formally pitching Priyanka Gandhi Vadra into the hurly burly of politics — that she is in the image of her grandmother and that this is about women’s empowerment. Typically, this is a setting where myth and reality merge effortlessly.

Overnight, despite her limited political responsibilities earlier, she has been accorded a larger-than-life persona. She would fight the might of the Bharatiya Janata Party in the part of Uttar Pradesh where it believes it is strongest: the part that comprises Prime Minister Narendra Modi’s constituency, the pocket borough of state chief minister Yogi Adityanath and Ayodhya.

It also merges with similar stories elsewhere, in the US for instance, where women with an Indian connection are making waves. Tulsi Gabbard and Kamala Harris have announced they will contest the US presidential elections in 2020. Like Priyanka Vadra here, these two women have made out a case for women’s empowerment and are making waves while also attracting money for their campaigns.

In a sense, Priyanka Vadra will be fulfilling a long-cherished wish of Congress workers and injecting new enthusiasm into the party’s preparations for the coming Lok Sabha elections.

Her appointment as general secretary has taken political circles by surprise and made her the reference point in politics for the moment. The BJP wasted little time in targeting the Congress over dynastic politics but some others were less caustic. The Shiv Sena said her appointment as general secretary would bring “achhe din” to the Congress. A BJP ally said her likeness to Indira Gandhi would be an advantage.

She is recognised for being a natural leader — charismatic, poised, sharp, intelligent, combative, communicative, quick-witted and one who easily connects with people. But, there is also an intensely private world which she inhabits.

A mother of two, Priyanka Vadra, 47, rarely ever misses a parents-teachers meeting at The Shri Ram School in Gurgaon. Parents, who attended PTAs with her, say she is very protective of her children and a family person.

She is known to be uncomfortable with the trappings of power, like the security of the Special Protection Group. When she attends school meetings, the commandos wait at the gate while she meets teachers.

Her private world includes Vipassana and Buddhism. She is an ardent practitioner of Vipassana and believes it keeps her calm even as she takes part in politics.

In an interview to NDTV, she once described herself as “almost a recluse” and said she did not want to be in politics. “I’m very happy living my life the way I am. I think there are certain aspects of politics which I’m just not suited to,” she had said.

Priyanka Gandhi had also said that she sees herself more like her father, Rajiv Gandhi, than her grandmother and had expressed an abiding admiration for her Italian-born mother for the way she steered the party through difficult times. “If there’s one woman I admire in the world, it’s my mother,” she had said.

The first indications that she would take an active political role came in 2017 when she was involved in the backroom discussions to thrash out an alliance with the Samajwadi Party during the assembly polls in Uttar Pradesh.

The party rank and file see her as the “brahmastra” that would bring the downfall of the BJP. In her new role, Priyanka Vadra is expected to energise the party’s campaign and queer the pitch for Modi, who is the MP from Varanasi.

Congress president Rahul Gandhi said she has been given the task of bringing the Congress back to power in Uttar Pradesh. Congress workers have an abiding faith in her ability to deliver at the grassroots.

Posters of “Priyanka lao” have often appeared outside the Congress central office after the party’s defeats over the last four-and-a-half years.

Gandhi has also given her some leeway, saying that she alone will decide whether she wants to contest the Lok Sabha polls.

After its debacle in 2014 Lok Sabha polls, it has lost several elections and has been all but wiped off from Uttar Pradesh where it once held sway.