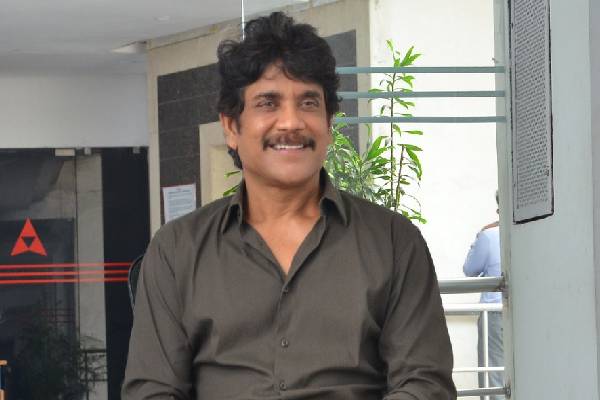 Telugu superstar Nagarjuna has congratulated director Mani Ratnam and his whole unit of ‘Ponniyin Selvan: 1’ saying that the ace director has proven with the historical fiction what a master craftsman he always was.

At a press conference in Chennai called by the unit of his upcoming film ‘The Ghost’, which in Tamil is titled ‘Ratchan – The Ghost’, Nagarjuna said: “Before I talk about my upcoming film, let me congratulate Mani Sir. ‘Ponniyin Selvan’ had always been his dream. He had always talked about it to me as well quite a few times.”

Stating that the ace director had proven what a mastercraftsman he always was, the actor said: “I have such fond memories of working with him in ‘Geethanjali’ in 1988. I have seen his journey of work and what he’s achieved.

Stating that he had been born and brought up in Chennai, before his dad took him to Hyderabad, the actor said that it feels like coming home every time he comes down to Chennai. 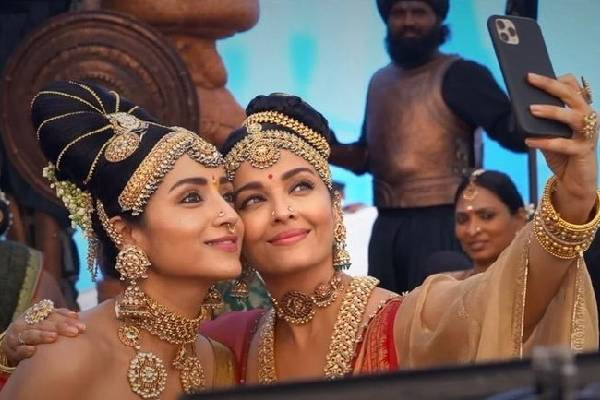 Actress Trisha Krishnan posed with Aishwarya Rai Bachchan for a picture on the sets of their upcoming film ‘Ponniyin Selvan’, directed by Mani Ratnam.

Trisha took to her Instagram, where she and Aishwarya are seen taking a selfie on the sets dressed in their costumes from the upcoming magnum opus.

For the caption, Trisha wrote: “Ash” with a hug emoji.

The film, whose first part is scheduled to open on September 30, is a story that revolves around the early life of prince Arulmozhi Varman, who later on went on to be known as the great Raja Chozhan.

In the movie, Aishwarya will reportedly be seen in a double role. She will be seen playing the role of queen Nandini and Mandakini Devi.

The film will be among the most expensive projects ever undertaken in the country. 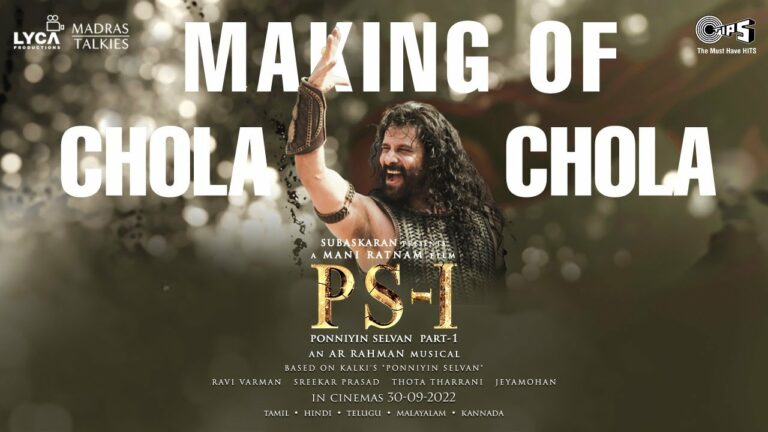 The unit of Mani Ratnam’s ‘Ponniyin Selvan’ released a behind-the-scenes video of the second single ‘Chola Chola’, which celebrates the glory of the Chola empire.

The BTS shows Vikram, who plays Adithya Karikalan, the elder brother of Rajaraja Chola I, in the film, dancing to the number. It also shows the scale of the song, and gives an idea of the large number of dancers who are a part of it.

The inspiring, foot-tapping number has been rendered by Sathya Prakash, VM Mahalingam and Nakul Abhyankar and has lyrics by Ilango Krishnan.

The behind-the-scenes video, directed by Sruti Harihara Subramanian, was shot by cinematographer Anandan.

Called by Mani Ratnam as his dream project, the film, the first part of which is scheduled to hit screens on September 30, features a host of top stars, including Vikram, Aishwarya Rai, Trisha, Karthi, Jayam Ravi, Jayaram, Parthiban, Lal, Vikram Prabhu, Jayaram, Prabhu and Prakash Raj. It will be among the most expensive projects ever undertaken in the country.

A.R. Rahman is scoring the music for this epic historical and cinematography is by Ravi Varman.
National Award winning art director Thotta Tharani is in charge of production design while Mani Ratnam’s trusted editor Sreekar Prasad is handling its editing. 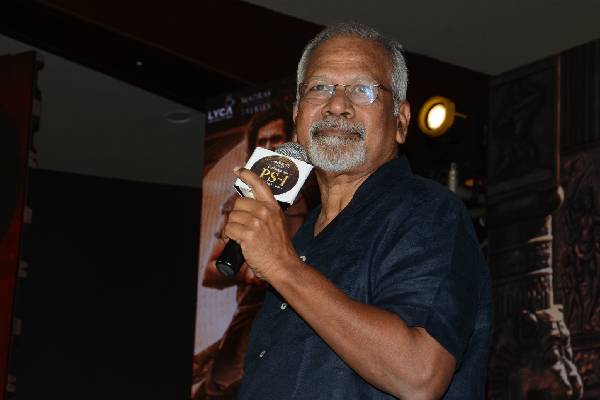 It is a blessing to work with Jayaram: Karthi 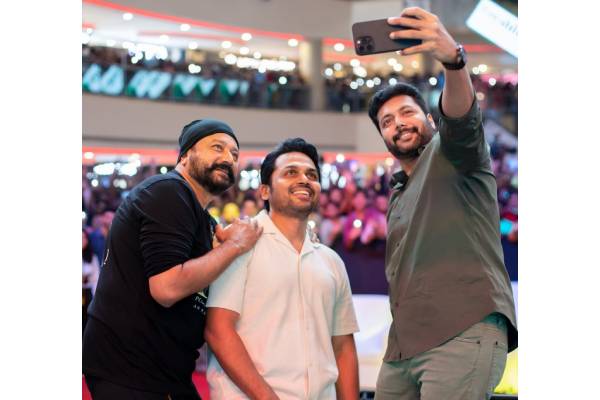 Showering praises on actor Jayaram, with whom he worked on director Mani Ratnam’s eagerly awaited magnum opus, ‘Ponniyin Selvan’, actor Karthi said that only Jayaram could be called an actor while Jayam Ravi and he were only at the ‘a’ of acting.

At an event where the first single of the film was recently launched, Karthi said, “Making this film was such an enterprising experience. Jayam Ravi, Jayaram sir and I were the only ones who have been together for the longest time for this film.

“It is a blessing to work with someone like Jayaram sir. Ravi and I would tell this to each other often. ‘Only he (Jayaram) is an actor and we are just at the ‘a’ of acting.’ Such a talent!”

Turning to Jayaram, Karthi said, “We are blessed sir.”

The first part of the two-part film, which is based on the classic novel ‘Ponniyin Selvan’ by legendary writer Kalki, releases on September 30 this year. 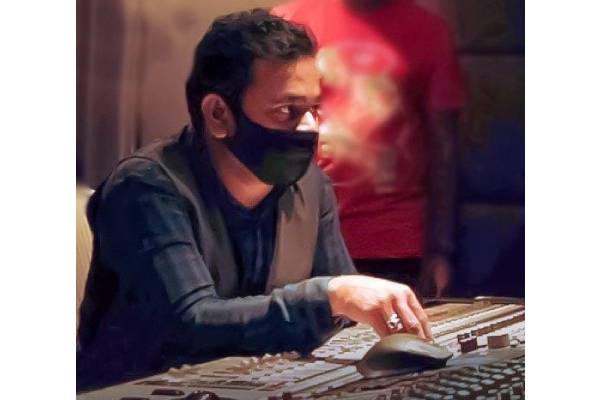 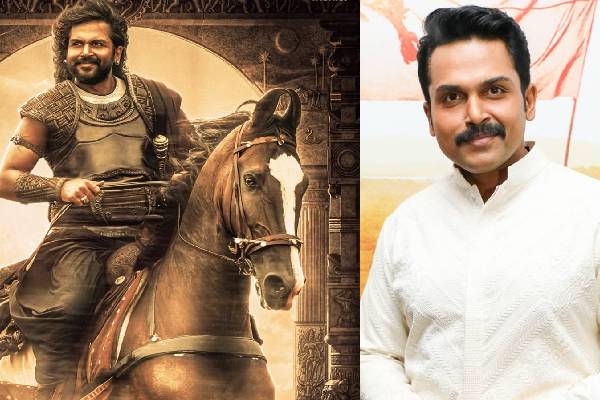 Karthi, who plays ‘Vanthiyathevan’, one of the central characters in director Mani Ratnam’s eagerly-awaited magnum opus ‘Ponniyin Selvan’, says the film based on a novel by eminent writer Kalki is a gift to the younger generation.

Speaking at the teaser launch event of the film that was held at the Chennai Trade Centre on Saturday, Karthi said, “In our schools, we learn more about how we were colonised by foreigners. Yet, we keep calling ourselves Tamilians! If someone were to ask us what makes us great, many of us here wouldn’t know what to answer. We wouldn’t know how our kings were. How our kingdoms and their administrations were. But it is important that we learn all of these.

“There is a lot to say (about the kingdoms and the administrations then). Take for instance the Cholas. The Kallanai dam, which they built almost 2,000 years ago, is still intact even to this day.

“The Veeranam lake, which was providing water to Chennai to meet its drinking water needs, was built by them. Twenty kilometres in length and seven kilometres in breadth, the lake was built by the king who got his army to do that. Then, there is the famous Brihadeeshwarar temple or the Periya Kovil, which has no foundation but has a height of 216 feet.”

Continuing to give more details of the other achievements of the Chola kings, Karthi said, “Even foreigners would only navigate on the sides of a water body. It was the Tamilians who learnt about the existence of undercurrents and used it to travel across seas.

“To this day, many of Tamil Nadu government’s welfare schemes were all formulated by the Cholas. There are several facts like these. But people like us who flip videos in 10 seconds don’t have the time for them.”

Karthi concluded by saying: “Presenting it in the format of a movie is a gift that Mani sir is presenting to the next generation. You cannot create history without learning history.

“The younger generation is going to see this (film) and learn. When you watch the movie, you will be overcome by a sense of pride. And when you feel pride, you want to preserve it. When you strive to preserve it, you make progress. I thank Mani sir for this big gift.”

A Huge relaxation and End to rumours 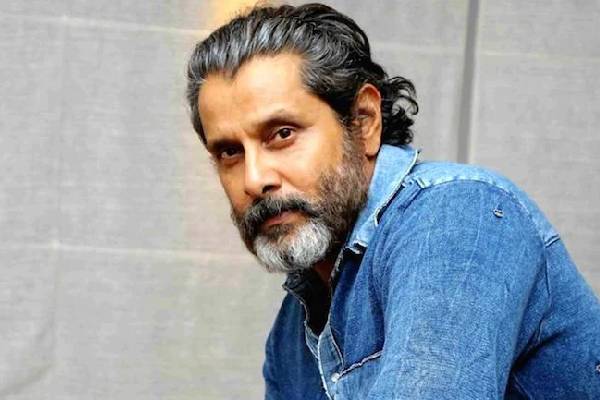 There was big news yesterday about Chiyaan Vikram’s health. By the evening his son Dhruv Vikram clarified that Vikram has joined in hospital only due to discomfort in his chest and it was not a heart attack, where his fans felt relaxed. Vikram has missed his prestigious Ponniyin Selvan (PS1) teaser launch due to his health issues, But the star hero is not going to miss his next event.

Vikram is going to attend Cobra’s audio launch on Monday, ie., on July 11th at Phoenix market city, Chennai. This event seems to end the speculations on Vikram’s health. The film is directed by Ajay Gnanmuthu and produced by Red Giant Movies. 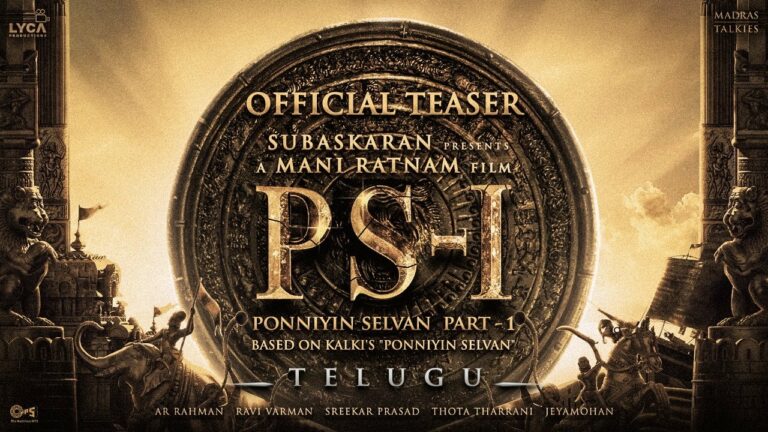 Ponniyin Selvan is a popular epic novel by Tamil writer Kalki. This is a historical fantasy story during the period of Cholas that gives us the experience of kings and queens. This is a two parts film and today PS1 Telugu teaser was launched by Mahesh Babu. PS1 is directed by Mani Ratnam and this is said to be his ambitious project. The teaser gives us a glimpse of all the characters in the film. AR Rahman is composing music and the background score is breathtaking. The costumes are extraordinary and make sure of giving us a grandeur experience on the big screen. This teaser also hints at the best war sequences and rich visuals.

PS1 will be released in Hindi, Telugu and Kannada versions. Aishwarya Rai Bachchan, Vikram, Karthi, Jayam Ravi, Ravi, Trisha, Aishwarya Lekshmi, Prakash Raj, Parthiban, Sarath Kumar, Jayaram and more prominent actors are in PS1. Ravi Varman is the cinematographer and Thota Tharani is roped in for production design. The first installment is said to be made on a budget of Rs 500 crores and it will hit the screens on September 30th across the globe. 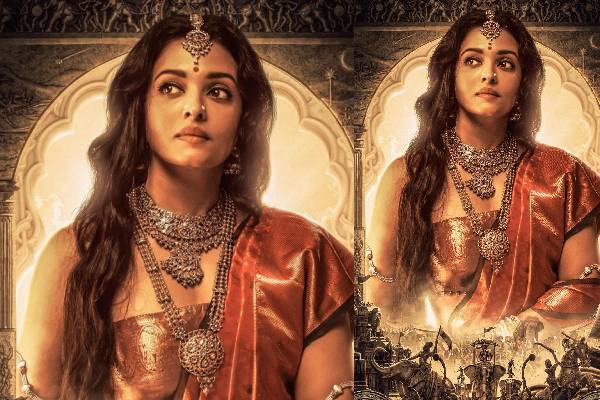 On the heels of releasing the first looks of Vikram as Aditya Karikalan and Karthi as Vanthiyathevan from director Mani Ratnam’s magnum opus, ‘Ponniyin Selvan’, the makers of the much-awaited epic film on Wednesday released the first look of Aishwarya Rai Bachchan as Queen Nandini in the film.

Lyca Productions, which is producing the film along with Mani Ratnam’s Madras Talkies, tweeted the first look picture of Aishwaraya Rai in the film and said: “Vengeance has a beautiful face! Meet Nandini, the queen of Pazhuvoor!” The film, the first part of which will release on September 30 this year, will release in five languages — Tamil, Telugu, Malayalam, Kannada and Hindi.

The film is based on the classic Tamil novel Ponniyin Selvan by eminent writer Kalki. The film, called by Mani Ratnam as his dream project, will be among the most expensive projects ever undertaken in the country.

The film has the best business handling for each of its departments. A. R. Rahman is scoring the music for this epic historical and cinematography is by Ravi Varman. National Award winning art director Thotta Tharani is in charge of production design while Mani Ratnam’s trusted editor Sreekar Prasad is the editor.