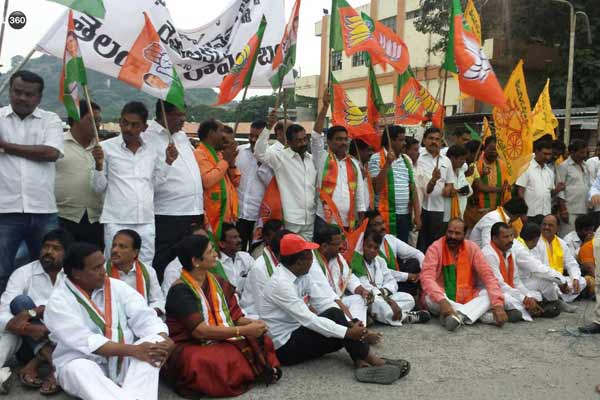 The state bandh called by the Opposition parties of Telangana , protesting the government refusal to waive the farm loan was partial in Hyderabad and other urban centres across the state. Though the traffic was much less that the usual days, the TSRTC effectively run services and the percentage was put at 69.64, according to TSRTC Managing Director, G.V. Ramana Rao.

BJP floor leader in Assemnbly Laxman, however, claimed that the bandh was successful. He thanked the public for the support they extended to the Telangana bandh called in support of farmer’s cause.He said despite the hurdles, created by the government which directed the police to arrest party leaders and activists, the public still voluntarily participated in the bandh and made it a sucess. “After witnessing the support from the public, the government should now come forward to the rescue of the farmers by implementing one-time settlement of loans.”

In the State capital Hyderabad senior opposition leaders Uttam Kumar Reddy, Bhatti Vikaramarkha, Marri Sashidhar Reddy, Prabhakar Rao (Congress), K. Laxman and Chintala Ramachandra Reddy, N Ramachandra Rao (BJP) along with many TDP leaders were arrested near various bus dept as they tried to stop the vehicles coming out of depotsHowever, as far as urban areas, including the twin cities were concerned, life appeared to be normal with most shops and establishments doing business as usual. In many places in the urban areas, it did not seem as if a bandh was on, at all. Even though party workers roamed around the city forcing the shops downed their shutters, but they reopened once the party leader left the area. 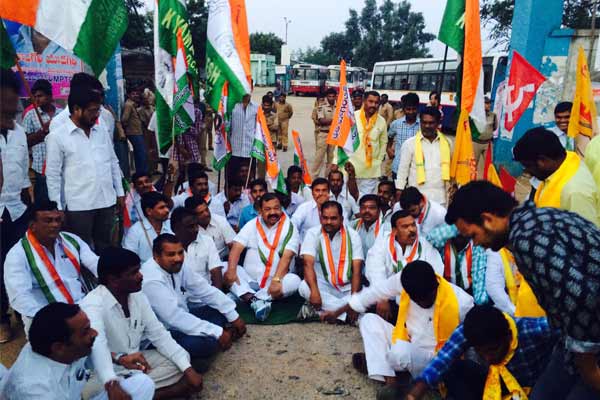 The leaders of all opposition parties in Telangana swung into action early in the morning to ensure that the capital city, Hyderabad, complied with their bandh call, given demanding one-time settlement of entire farm loan so that suicides of farmers could be averted. The bandh call is given by Congress, TDP, BJP, CPI and CPM. YSR Congress also extended support to the bandh.

Early in the morning the leaders under the leadership of TPCC president N Uttamkumar Reddy, staged dharnas before RTC depots in Hyderabad. At several places, leaders have been taken into custody and shifted to nearby police stations. Former Congres s MLA G Sudheer Reddy staged a sit-in opposite Dilshuknagar bus depot with his followers as early as 5 AM in the morning. He was arrested and shifted to Amberpet Police station. Congress working president Bhatti Vikramarkha had been arrested and taken Nampally police station.He was arrest while staging dhrana before Raniganj depot ti along with scores of Congress workers. Similarly former minister and senior Congress leader Marri Sashidhar Reddy, MLC Prabhakar Rao, former city mayor Banda Karthika Reddy, Youth Congress leaders Banda Chandra Reddy, Marri Aditya Reddy, Manavata Roy, Nuti Srikanth had also been arrested and shifted to Nampally Police Stion. 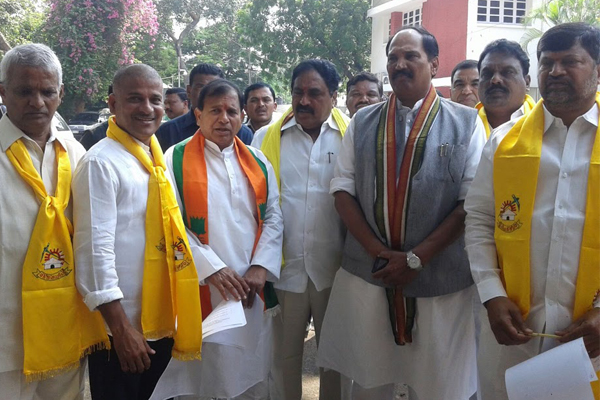 All opposition parties in Telangana have given a call for state bandh on October 10 demanding one-time settlement of remaining loan waiver from the government. They said the opposition parties had been compelled to call the bandh as the farmers’ suicides were happening unabated and about 200 farmers committed suicide during the seven days the T-Assembly functioned.

The parties which met this morning in Assembly premises decided to go ahead on the bandh call as the chief minister chose not to concede their demand. The parties, Congress, TDP and BJP today flayed chief minister KCR for his insensitivity and intrasingency towards farmers.

After the meeting, BJP leader chintala Ramachandra Reddy said chief minister KCR’s two-hour long speech on the floor of Assembly did not give hope for farmers of Telangana, who were embracing suicide as the solution to their crisis. PCC president N Uttamkumar Reddy said the all suicides were murders by the state. Chief minister was not at all ready to address the issue sincerely, he alleged. ” We won’t leave the government till the one-time loan waiver is implemented.,” he said adding that government was showing the death toll due to suicides reduced.

TDP Telangana president L Ramana also called upon the people to come forward to save the lives of farmers by participating in the bandh. Congress city president Danam Nagender urged the business houses and traders in the city to make the bandh a success and express solidarity to the suffering farmers. All the leaders said they would concentrate in making the bandh success in Hyderabad , as capital city bandh alone would put pressure on the government. The leaders were critical of the Government attitude towards running the Assembly. ” The chief minister said he would run the house for 15 days. Finally, it ended up a seven-day affair. The entire opposition had been suspended . The government adjourned the house sine die as if there was some urgent work more important than the suicides of farmers. Finally it turned out that Chief Minister was holding a TRSLP meeting to discuss Narayankhed bypoll,” they said.
Congress will organize a rally from Charminat to secunderabad on bandh day.

The separate Telangana state is observing first state-wide bandh on Friday in support of the striking municipal health workers. It is for the first time that  chief minister K Chandrasekhar Rao, who used bandhs and dharnas as a tool to mobilize people to achieve statehood to the region in the past  10 years. He lent legitimacy to bandhs in politics. Not a day passed without either a dhana or bandh being obsered somewhere by some organization in the state during emotive days of T-agitation. His followers were hit by police lathis and faced arrests. Now the same is happening even after the achievement of statehood, albeit in reverse order. TRS is now at the helm of affairs unleashing the police force to suppress the movement of municipal  sanitary workers. Incidentally, the ruling party was the first political outfit to call for a bandh in Mahabubnagar district last week in support of Palamuru irrigation project.

These workers have been on strike for two weeks demanding a hike in the salaries.

The bandh call is given by all Left parties in the state protesting the police highhandedness on the leaders of these parties yesterday.

Thursday state Congress expressed solidarity with Left Parties and striking employees. Telangana PCC president N Uttam Kumar Reddy, in a statement, urged the people to support the bandh. “Instead of addressing the issues of municipal employees, the TRS government has unleashed the repression against the hapless employees. It is unfortunate that government is using the police to silience the voice of employees,” Uttam said.

Party working president Bhatti Vikramarkah said the demands of municipal workers were genuine and should be conceded to immediately.

“The chief minister who speaks of poor day in and day out is behaving dictatorially when the really poor confronted him,” Bhatti said.