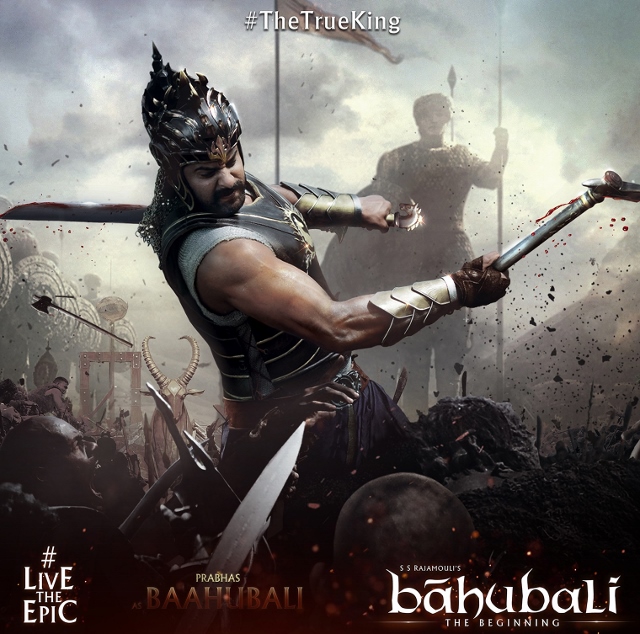 “Bahubali” wave is sweeping the Indian film industry records and re-writing the rules of the game in a way that is turning heads even in Bollywood. After creating an unprecedented blitzkrieg of publicity and hype before the release, the makers and the producers are tasting victory at the box office across the markets.[pullquote position=”right”]After a long break of solitude and much-delayed release, “Bahubali” is smashing the box-office records world-wide. What are the lessons for South-based film-makers from this audacious team led by SS Rajamouli?[/pullquote]In the US, it has crossed $3.6 million on Saturday (beats “PK”‘s $3.1 million). In Bollywood, the Hindi dubbed version already crossed Rs.5.15 crores, beating the collections of previous films ofRajinikanth and Kamal Hassan (both “Robot” and “Vishwaroopam” collected Rs.4.1 crores together) – making it the biggest grosser among South-released Hindi versions in Bollywood. Overall, the film is expected to touch around Rs.100 crores (gross) in the first two days of release – way above the records created by films like “Doom 3”, “Happy New Year”, “Krish” and “Chennai Express”.

This is an eye-popping statistic for Tollywood which makes one of the highest number of films per annum but failed to get the world attention so far, except a few nationally-acclaimed films like “Sankarabharanam” and “Maya Bazaar”. The success of the film is surely drawing the attention of trade experts and students of Film Studies across the world but savor this moment of glory for now: “Bahubali” is rated 9.4/10 in the IMDB website – the highest rating earned by an Indian film. It is released in four official versions – Telugu, Tamil, Malayalam and Hindi and so far all versions except Hindi are doing relatively well. Marketed as the most expensive Indian film ever (Rs.250 crores), its trailer crossed over 3 million views and earned plaudits from the likes of Amitabh Bachchan, Shekhar Kaptur and Karan Johar (who is distributing the Hindi version of the film) and the film got released on July 10 in over 4200 screens world-wide. The Telugu version collected over Rs.15 crores from the première screenings on Thursday and Friday which is another new record for Tollywood films – because fans of Rajamouli and Prabhas were waiting for 1000 days since the film was launched.

The spectacular success of “Bahubali” needs to be celebrated for many reasons.

One, it proves that with the right mix of content, high-caliber technicians and marketing Tollywood can grab the world eyeballs. The stars in “Bahubali” were not the monarchs of Bollywood – there was no Khan or Kapoor in it and no glamour diva like Deepika or Priyanka to pull the punches, no Rajinikanth or Kamal Hassan to rock the net with tens of thousands of fan clubs all over the world. [pullquote position=”left”] Bahubali proves that right mix of content and technicians can make a world class film without Khan’s or Kapoors. [/pullquote]There was just a starcast of Prabhas-Rana-Tamannaah-Anushka who blocked their dates for the duration of the making of the film- none of them and a technical team that was ready to collapse their trade-skills into a watchable biopic – Sabo Cyril designed the sets with impeccable detailing and diligence, Senthil Kumar drove the cinematography with a director’s eye for grand visuals and mesmerizing landscapes, Peter Hein created the most stylish and incredulous stunts in a period setting with resounding wolf-whistles, MM Keeravani re-imagined a music score that conveyed a panorama of emotions that struck a chord. So, it didn’t matter that the starpower was not well-known outside Tollywood – nobody knew the hero Prabhas and those who recognized Rana and Tamannah didn’t give them a half-chance. (But they turned out to be the proverbial dark horse in winning accolades for their performances).