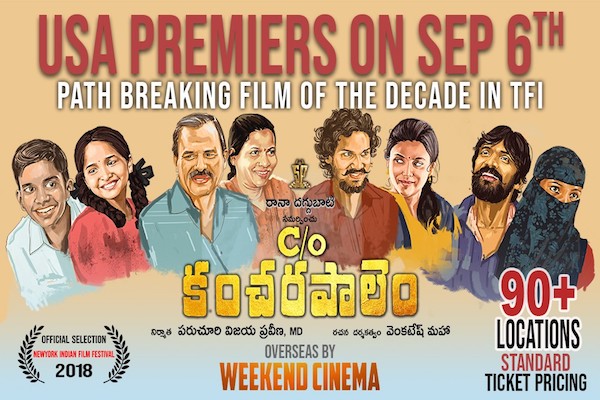 C/o. Kancharapalem – “A small film with Golden Heart” received rave reviews from across the entire Telugu Film Industry and critics is all set for the USA Premiers Today.

Many directors including SS Rajamouli, Sekhar Kammula, Krish, Sukumar, Vamsi Paidipally have watched the movie and showered praises describing the film as “One of a kind” and urge everyone to go and watch the movie.

C/o. Kancharapalem – is a beautiful depiction of life in a village and is categorized in the romance genre. It is a reflection of life in its purest form and is guaranteed to resonate with all viewers as the story is portrayed by the residents of Kancharapalem (is a locality in the city of Visakhapatnam) themselves.

Almost the entire cast of the film, i.e. around 80 people, have been selected from real life and from Kancharapalem locality. As the film has been made with a conviction that they shouldn’t miss the nativity and to be more raw and realistic. Not to miss the essence.

This film is produced by Dr. Vijaya Praveena Paruchuri (a New York based Cardiologist) and directed by Venkatesh Maha, has already set a remarkable achievement of beingthe first ever Telugu film to be selected for the New York Indian Film Festival 2018 – a clear hallmark of its content’s authenticity and honesty.

Dr. Vijaya Praveena Paruchuri also acted in the film and equates the essence of C/o. Kancharapalem to ‘Malgudi Days’ in the way the town stands witness to four stories unfolding within its neighbourhoods.

Weekend Cinema – a film distribution company (USA) with the prime intention of showcasing good content cinema is proud to be associated with Suresh Productions and Mr. Rana Daggubati and distributing C/o Kancharapalem – “The Big Small Film of the Year” to Overseas movie enthusiasts and viewers.

We would like to extend our heartfelt thanks to Mr. Suresh Babu Daggubati and Mr. Rana Daggubati for collaborating with us and for having immense faith in our intention to entertain all film lovers.

C/o. Kancharapalem is premiering in USA TODAY (Sept 06th 2018 – Thursday) in many locations and releasing in 90+ Locations all over USA.