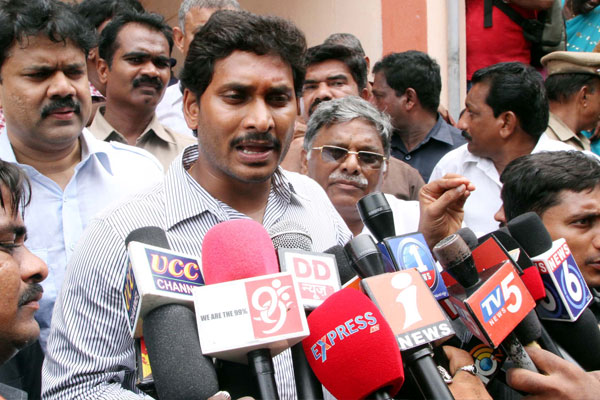 Guntur Police denied permission to YS Jagan to launch his indefinite fast from September 26 from Guntur. Stating that the venue (a ground opposite AC College) was located close to the educational institutes and obstructs Ganesh idol immersion procession, the police declined permission, while YSR Congress cried foul.

Jagan has planned the indefinite fast to exert pressure on the state and the centre to declare special category status to Andhra Pradesh. He announced his decision to sit on fast on floor of the Assembly if chief minister Chandrababu Naidu failed to get special status bestowed on Andhra Pradesh in 15 days. (Chandrababu Naidu is in Delhi today to meet many union ministers. And PM is abroad). In the past two weeks, Jagan has done lot of ground work for his fast. He met students from two important universities in the state-Sri Venkateswara University and Andhra University- to rope in them into his campaign. He told them that if they didn’t fight for the special status, more than the states, it was their future that would be at stake.

When everything is ready for his fast, police denied permission to the fast on the ground that his venue of fast was in midst of several schools and hospitals. They also cited the possible obstruction to procession of Ganesh idol immersion as a lot of congregation was expected during fast.
YSRCP MLA Visweswara Reddy said the TDP governments efforts to thwart the indefinite fast would not meet with success.

“Jagan’ s demand has the backing of entire Telugu population, especially students and youth. People will not tolerate if roadblocks are created for Jagan’s fight for special status. The TDP is scared of the mass support to the cause,” Reddy said. Meanwhile tension prevailed at the venue of proposed fast, opposite AC college with state deploying police . A lot of YSRC supporters also reached the venue. Assuring full cooperation to the Ganesh idol procession, the party demanded that permission be issued to the fast.
“TDP has sold out the interests of people of Andhra to centre to bail himself out of cash-for-vote scam. We know pretty well that he would not fight for it. Now, when Jagan is waging an uncompromising fight, instead of supporting him, chief minister Naidu is scuttling it,” he said adding that people were watching TDP politics.