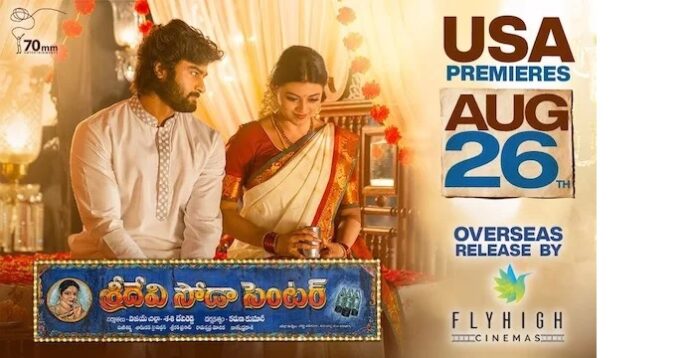 An upper-caste girl Sridevi  ( Anandhi) falls in love with an electrician  Suribabu  ( Sudhir Babu) in her village.   A caste fanatic head from the girl’s community instigates her father to oppose the love. On the other hand, the boy Suri goes to jail in a clash with a rival group. When Suri is about to be acquitted in the court, the story takes a turn and he returns to Jail. With serious turns, the story reaches a shocking climax

Sridevi Soda Center has a much darker theme than the promotional content. Inter-caste love story backdrop is quite regular on Indian screen but this film’s core point has striking similarities with the short film ‘Oor Iravu’ (starring Prakash raj, Sai Pallavi) In ‘Paava Kadhaigal’.  The realistic raw ambiance that was reflected in the director Karuna Kumar’s first film ‘Palasa’  is somewhat missing this time. The first half of ‘soda center’ is pretty much a run-of-mill narration in which every scene follows a predictable path, except the dialogues. Only with the twist that comes before the interval, things get on track. However, the producers spent lavishly on the boat race, songs, fights, and the result is visible on the screen. To add a bit of commerciality, some form of entertainment in the first half would have helped.

The crux of the film opens up as we get into the second half.  Sridevi’s revolt against her father, villain Kasi‘s chilling cruelty followed by Suribabu ‘s onslaught, etc. engage the audience who prefer serious themes.

Sudhirbabu as Suribabu has done a commendable job in action episodes. Despite being an urban-oriented hero, he transformed well into a rural character. However, his dubbing for few words sounds too refined for the character. In some emotional scenes, a bit more overplay would have helped. Heroine Anandhi is adequate as Sodakottu Sridevi.  Naresh stands out among character artists. His character has a variety of body language. Raghubabu, Ajay, and Satyam Rajesh play other characters.

‘Sridevi Soda Center’ is an intense film, with the routine inter-caste love theme, which slowly transforms into shocking climax portions. Production and Technical values are of high standards, the dialogues are commendable. Despite some positives, this slow-paced film might appeal only to serious drama lovers due to its dark tone.