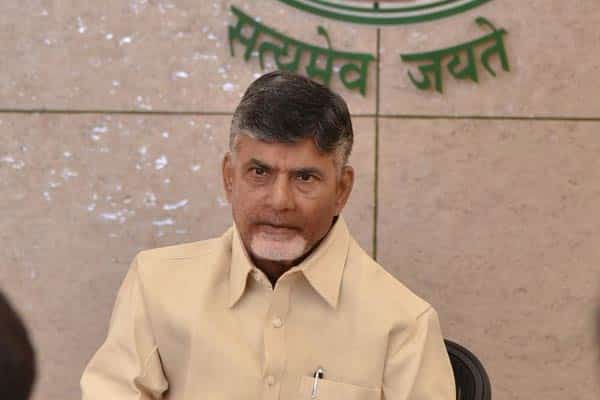 Andhra Pradesh Chief Minister N Chandrababu Naidu came down heavily on opposition leader Y S Jagan Mohan Reddy for accusing him of stealing water. Pointing out at the report run by Sakshi Newspaper about diverting huge quantity of water from Pothireddypadu, Naidu asked, “How can giving water be termed as stealing?”

It may be noted that Jagan owned media house Sakshi, ran a report on drawing water from Pothireddypadu in two different styles based on the region on Thursday. While in Telangana edition they critiqued Naidu for stealing water, in AP edition, they just said the water diversion has been halted.

AP CM deplored that Sakshi in its Telangana edition are writing only with the intention to provoke people of the neighbouring state. TDP supremo asked, “Why are you obstructing us from providing water to Pulivendula and Kadapa?” He said that the Krishna waters are being used in equal proportion in Telangana and Andhra Pradesh. He critiqued the opposition for stalling everything and that too in a very ghastly manner.

Cases against Sakshi TV and Jagan for violating Election Code

A case has been registered against Andhra Pradesh Opposition Leader Y S Jagan Mohan Reddy’s Sakshi Channel at the Hyderabad police station on Wednesday for violation of Election code of conduct. State Election Commission chief Bhanwarlal filed the complaint against the news channel for broadcasting survey on Nandyal by poll. It may be recalled that the election commission prohibited the media houses from broadcasting exit polls or surveys on television. However, Sakshi ignored the order and went ahead to broadcast news in the name of survey on Tuesday. Police registered a case under Section 126A and B.

On the other hand, a case has been registered against Jagan in Nandyal three town police station for violation of election code. TDP leaders complained about his poor remarks on Chief Minister Chandrababu Naidu made as part of Nandyal byelection campaign. Central Election Commission has directed the Kurnool district collector to take action, as his remarks come under violation of election code. The case has been registered under Sections 188, 504, 506 and under Public Representation Act for violating model code of conduct.

The Rising Importance of Jagan in Eenadu 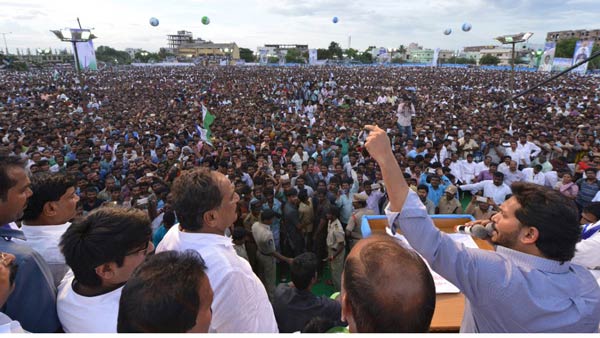 The special attraction at C Ramoji Rao grand daughter’s wedding last week was the presence of the opponent Y S Jagan Mohan Reddy. While it could be termed as courtesy call, it did give rise to several discussions. Known to be arch-rivals, the media barons are being more cordial to each other which is evident from their regular interactions at several functions. However, one significant change is the coverage the Opposition leader is getting in Eenadu in recent times.

The media house which had a tag of being inclined to TDP and NDA is unexpectedly publishing stories about Jagan. Previously, one would need a lens to find an article underscoring Jagan in the paper. However, the direction of the winds seemed to have changed, especially with Eenadu putting Jagan’s speech as front page banner item. Be it the YSRCP Plenary sessions last month or Nandyal public meeting on Thursday, Eenadu’s coverage had raised several eyebrows in disbelief. The coverage has been reportedly way better than Jagan’s own Sakshi.

This is a bombshell for the ruling TDP especially with the channel and newspaper continuing to give weightage to Jagan. While the TDP leaders keep wondering the reasons for Eenadu to promote Jagan, it is definitely a relief to the readers.

Is Eenadu gearing up for future winds and adjusting its sails now? Is it Modi meets Jagan after effect? Hope, Eenadu’s choice of covering Jagan reflects hopes and not fears.

Andhra Jyothy and Sakshi seemingly have two things in common, both have been writing unsubstantiated stories and equally of them get around well.

Heritage Foods sent legal notices to Sakshi Media house for issuing false statement on Heritage vehicles being used for red sanders smuggling. The Heritage Foods spokesperson clarified that the vehicle did not belong to the firm. It may be recalled that a four-wheeler allegedly which was painted with Heritage company logo was seized on Monday for unlawfully carrying 71 logs of red sanders worth one crore rupees at Karkambadi Road near Seshachalam Reserve forest in Tirupati. Sakshi media house broad casted the news alleging that the vehicle belonged the Chief Minister founded Heritage firms and accused the ruling party of dubious acts.

On the other hand, Andhra Jyothi broad casted a story, saying that I-PAC, led by strategist Prashant Kishor, conducted surveys and offered feedback to Opposition YSR Congress Party for the upcoming 2019 Assembly elections. The cross-party advocacy group denied the reports and in a tweet said “We haven’t done any survey nor have given feedback to YSRCP wrt any individual/party. All news in this regard is completely speculative”

It is evident from these reports that if detesting is failing to work, start broadcasting fabrications. It’s high time for both the media houses to ask before assuming. 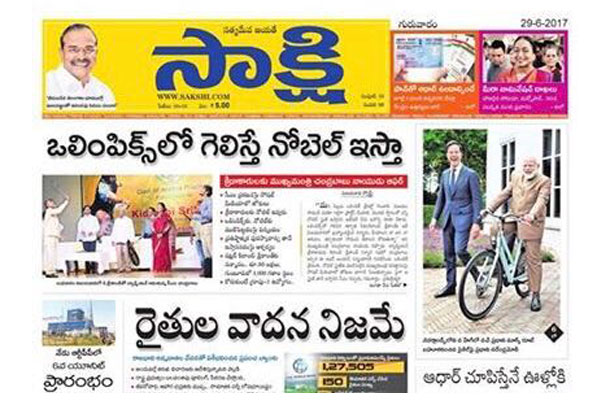 Once is a mistake, twice is a pattern and three times is a habit. This saying applies well to the Andhra Pradesh Opposition Leader Y S Jagan Mohan Reddy owned newspaper Sakshi. It has become a tradition for the daily to publish front page articles based on the points raised by social media spammers. The media house has time and again proved that, regardless of the facts it will only hear, what it wants to hear and write what it wants to write.

It’s high time for Sakshi to become more informed than just being prejudiced. It reported the modified version of the Chief Minister’s speech as a banner headline in first page. The newspaper minced Chandrababu’s words by publishing, “Win in Olympics and I will confer Nobel prize”. TDP supremo paused in his speech when recalling about the Nobel prize announcement and he is grammatically correct. It is these predetermined choices by the reporters that are further denting the image of the media house. Sakshi must make a habit of fact checking before partaking and if they don’t have time, then it is better they avoid sharing fake news.

Here is the 5 months old video in which Chandrababu announced 100 crore for Nobel Prize winner in Tirupati Science congress : (  Yesterday , In vijayawada , he referred back to this 100 Crore Nobel prize announcement,  and also announced another 100 Crore for Olympic winner – if any ) 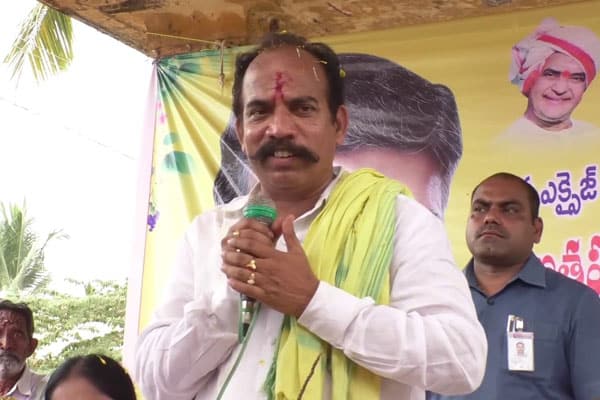 Andhra Pradesh Excise Minister K S Jawahar confronted Opposition Leader Y S Jagan Mohan Reddy regarding a story published in Sakshi newspaper on the new excise policy. The newspaper published a story on the new policy with a banner headline in first page where it alleged that the department is planning to plunder 332.8 crore rupees.

It may be noted that Jawahar who was blessed as the Excise minister in the recent cabinet expansion, said that policy will adhere to the Supreme Court guidelines on renewals and added that the it would be implemented from July 1 in the state. He said that 85 new bars will get permission at various places on the basis of the population up to 30,000 people.

Sakshi accused that under the direction of a prominent leader, a minister is collecting 40 lakh rupees from the current bar license holders to renew the license for five years. The state will have soon have 832 bars including the new 85. Based on this Sakshi came up with the figure of 332.8crore rupees.

Condemning these charges, Excise minister challenged that if Jagan is able to prove the charges, he would resign for ministerial position and retire from politics. However, in case Jagan fails to ascertain the allegations within 24hours, the TDP leader asked the opposition leader to leave the state. He called upon the YSRCP chief for face to face discussion regarding the allegations. 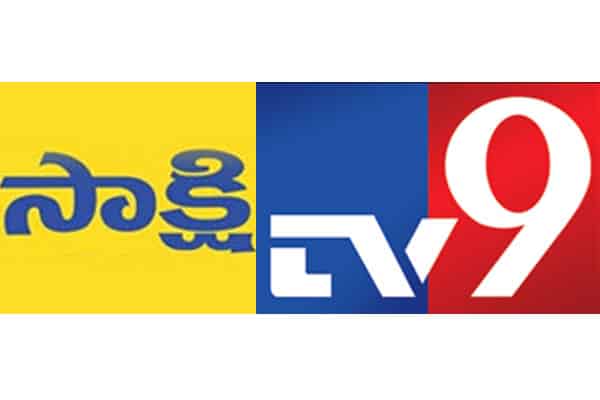 To be persuasive, a media house must be believable. To be believable, it must be credible and to be credible it must be truthful. But the actions of Sakshi seem otherwise. Recently a it reported that TV9 CEO Ravi Prakash met Andhra Pradesh Chief Minister Chandrababu Naidu. Sakshi reported this incident as a banner headline in first page where it wrote that the duo met at Park Hyatt and held discussions for an hour.

It’s bizarre to assume that any personality who visits that hotel is bound to meet the CM. “I happened to go to Park Hyatt for lunch that day and apparently AP CM was also there. It’s been a year since I met Chandrababu.” told Ravi Prakash to Telugu360. Based on this report, several other stories emerged about the agenda of the meeting. It is ridiculous to connect dots without fact checking. It is unfortunate that media house that is run by senior journalists such as Ramachandra Murthy believes in their own lies and the story they make up in their heads. It’s high time for Sakshi to realize that credibility comes from acting in others interests before your own.

PS: Yesterday, one of the ‘great’ gossip website a sister of Sakshi added their own flavor about this meeting, which never happened. Incidentally, the article was deleted in few hours. In fact, this has been modus operandi by a particular group of media. First it comes in Sakshi, then in few YouTube handles started with sole intent to propagate gossip and then finally it lands on Sakshi’s sister gossip website.