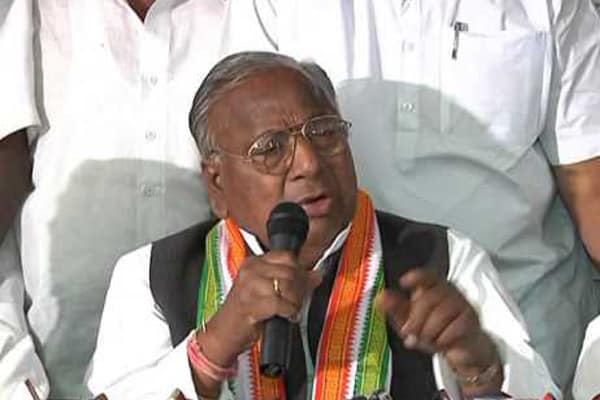 The case against the former MP was registered after he along with a couple of followers garlanded B.R. Ambedkar’s statue on the occasion of his 129th birth anniversary.

Wearing a face mask, Rao reached the Ambedkar statue near Tank Bund and garlanded it to pay his tributes, ignoring the advice of policemen posted there. The Congress leader also had an argument with the cops.

A case under Sections 188 and 269 of the IPC was registered against Rao and others at the Saifabad police station. 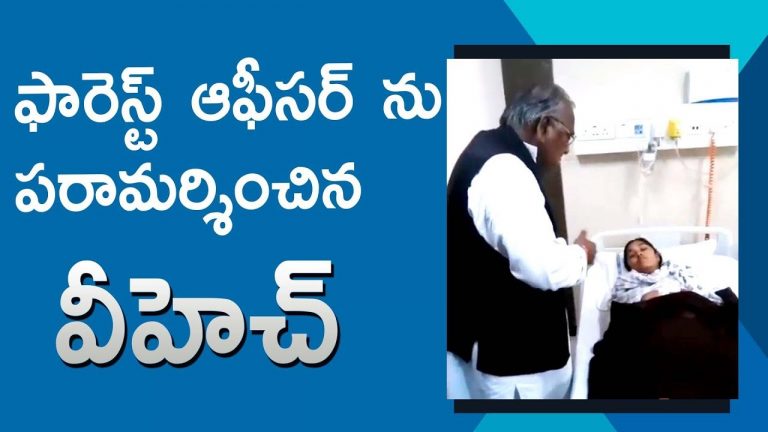 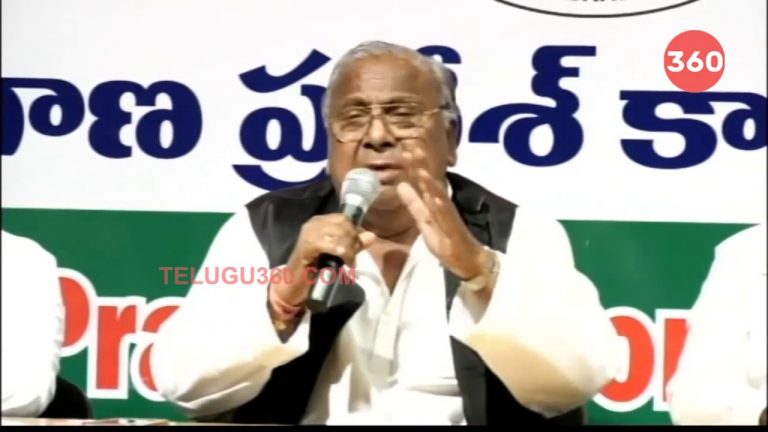 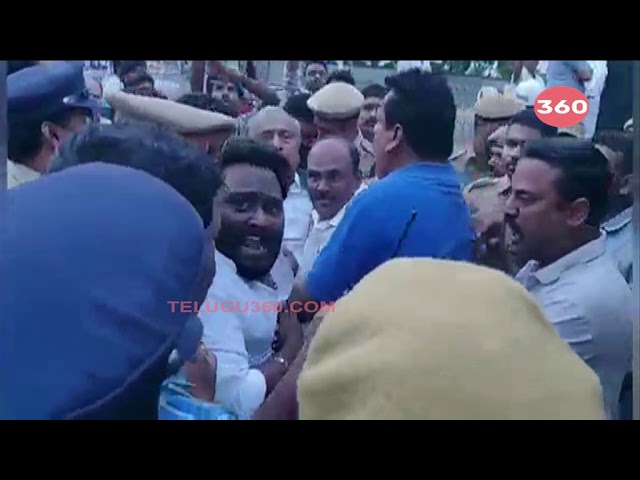 What made Vijayashanti, VH engage in war of words? 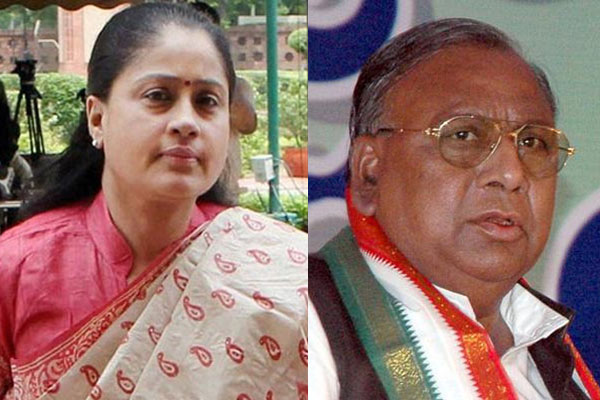 Congress star campaigner Vijayashanti and former PCC president V Hanumantha Rao, popularly known as VH, were publicly seen in a row over disagreeing on something and trying to stop each other from making a public speech. This incident took place during a road show of Congress party at Gajwel, Sddipet district.

Congress party has turned keen on Gajwel constituency, the home constituency of Telangana chief minister K Chandrashekhar Rao, and has deployed all its senior leaders and star campaigners in Medak Lok Sabha constituency, where Anilkumar is contesting from the grand old party.

Congress is known for internal democracy and Gandhibhavan has been witnessing such freedom of leaders, who often disagree with others and resort to protest against decisions of TPCC.

For an unknown reason, Vijayashanti and VH had a war of words on the vehicle top during the roadshow. As a result, both the leaders Vijayashanti and Kusumkumar left the roadshow abruptly. When the Congress MP candidate Anil Kumar got a chance to speak, there’s no public to hear the speech.

“It’s nothing major. Several senior leaders were participating in the roadshow. So, to get every leader to speak, all the leaders already told to speak briefly. Vijayashanti, working president Kusumkumar, Ramulu Naik and other leaders spoke. When VH got his turn to speak, Vijayashanti asked him to finish the speech quickly. But, VH got angry over it and questioned Vijayashanti for disturbing him. This confrontation led to a bit of exchanging of words. Vijayashanti and Kusumkumar immediately withdrew from the roadshow,” said a leader, who took part in the roadshow.

Talking to the press, VH said, ‘KCR is dreaming of establishing ‘Federal Front’, aka the Third Front, and play a key role in the national politics. Those dreams of his will never materialize.

He failed to fulfill the promises he has made to the people of Telangana. No one is ready to trust him or his Federal Front. There is absolutely no possibility of building a third front. Despite his efforts, and other means, Federal Front will not be formed.

Congress Party’s ‘Praja Chaitanya Yatra’ has turned out to be very successful. It is highly possible for Congress to win in the 2019 Telangana Assembly elections if all the leaders can stay together’.
VH’s comments clearly indicate the fact that, Congress is trying to play down the possibility of Federal Front. By ignoring it, rather than condemning it, the Congress leaders are trying to project that Congress Party is the only alternative to BJP at the Centre.

TPCC on the same page with BJP 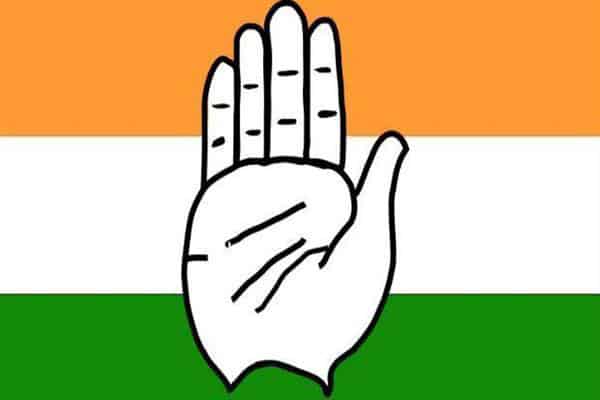 At a time when all the opposition parties, including the Congress, are accusing the Bharatiya Janata Party and its fringe groups of trying to drag the country into right-wing fanaticism, Telangana Pradesh Congress seems to be playing the same card, unwittingly. Otherwise, how could one explain the protest launched by former Congress Member of Parliament V Hanumantha Rao against Sunburn Festival at Gachibowli Stadium in Hyderabad on Friday?

On Thursday, he submitted a petition to the Cyberbad police requesting for a ban on the fest. His contention was such rock fests were against Indian culture and free flow of booze, dance and music were spoiling the youth.

Other leaders went to the extent of accusing the ruling TRS government and its leaders of promoting drug culture through such events. TPCC spokesperson Addanki Dayakar questioned the state government how permission had been granted to the music fest when democratic agitations were not allowed.

Even Revanth Reddy, former TDP leader who recently switched his loyalty to Congress, jumped on to the bandwagon saying high-end events like Sunburn were used to pedal drugs among the youths, inferring drug mafias were getting tacit government support to push their trade.

The star attraction at the event is Kygo, the Norwegian songwriter and musician, who has a cult following throughout the world. Gachibowli being the city’s youngistan, Kygo is the rage among lakhs of techies.

What’s surprising is this is the first time Telangana Congress leaders are talking the same language as their counterparts in BJP, knowing full well that such talk is futile. It only helps raise controversies and give gist to some TV channels to debate. Or, is it an attempt to keep in limelight as the KCR team is stealing the show with Global Entrepreneurship Summit, Ivanka Trump’s visit and Metro inauguration by Prime Minister Modi? 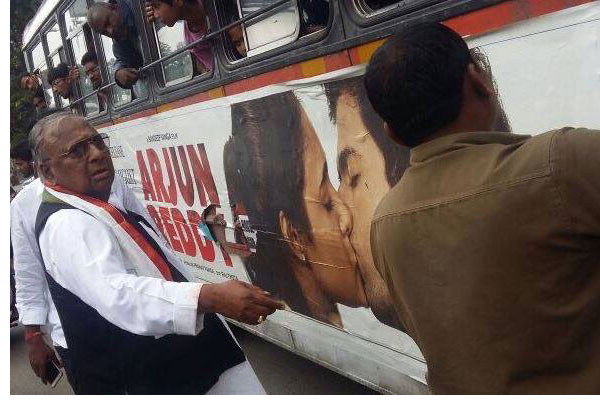 Senior Congress leader and former member of Rajya Sabha V Hanumantha Rao came down heavily on maverick director Ram Gopal Varma and said that the film industry is becoming crooked because of such directors.

He continued his tirade against the upcoming flick Arjun Reddy starring Vijay Devarakonda slated to hit screens tomorrow. The Congress leader staged a Dharna at the Censor Board office on Thursday. He criticised that several films posters are showing obscene and abusive content. He reportedly said that such posters on RTC buses are causing road accidents.

VH said that they would intensify their protests if the board fails to remove the objectionable scenes from the movie. 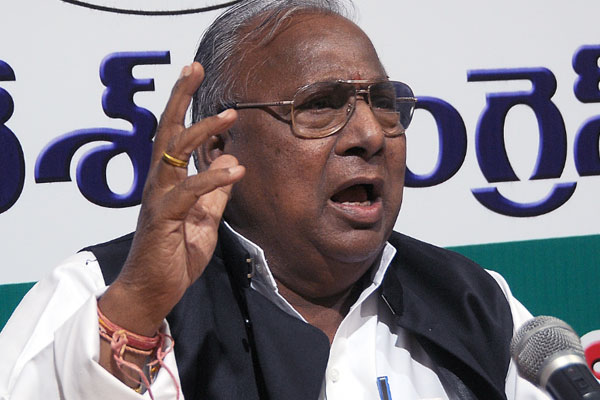 Congress senior leader and Rajya Sabha MP is embarking on a Dharna spree from tomorrow. He will conduct dharnas and Rastra Rokos in all district headquarters starting August 27, “to expose the Prime Minister Narendra Mod government’s brazen attempt to protect corrupt BJP chief ministers and union minister who are involved in scams”, he said. Hanumantha Rao, talking to T-360 from Narayankhed, where he was attending the funeral of Congress MLA Kishta Reddy, said his first Dharna would take place in Warangal on Thursday at 10.30 AM.

Rao condoled the sudden demise of Kishta Reddy on Tuesdsay, who, he said an ardent Congress man. His death was a great loss to the party, he added. Talking about his program, Rao said Congress president Sona Gandhi and Vice president Rahul Gandhi had successfully cornered the BJP leadership and Prime Minister Modi on the corruption charges against Sushma Swaraj, External affairs minister, Shivraj Singh Chowhan , MP Chief Minister, Vashundhara Raje Scindia , Rajasthan chief minister, in parliament. ” As high level inquiries have been ordered into these case, Congress demanded the resignation of these leaders from their respective positions, as a precondition to allow the parliament function. Surprisingly instead of responding to the demand of Congress, Prime Minister Modi chose to abstain from the House and started charging Congress as responsible for the dysfunction of parliament,” Rao said.

During UPA regime, Hanumantha Rao recalled, when Opposition BJP raised the corruption in 2G spectrum auction, Commonwealth games and coal scam, Prime Minister Manmohan Singh asked all the minister to step down.
” We demand the same response from BJP as well,” he said.

” I, as a Congress MP, feel it is incumbent upon me to take the BJPs corruption in higher level in the administration to the people. I want to conduct dharnas in all district headquarters starting from Warangal followed by Karimanagar, Adilabad, Mahabubnagar, Nizambad, Khammam, Ranga Reddy, Medak etc.” he said.

VH raises banner in RS for removal of Sushma 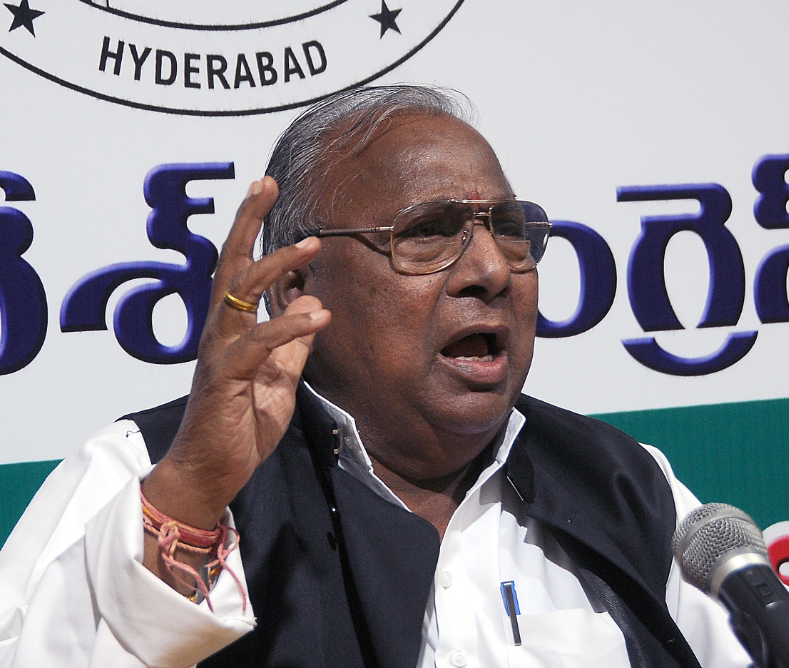 The he first day of monsoon session began  today on stormy note in Rajya Sabha while the Lok Sabha was adjourned following obituary references. The Rajya Sabha, which continued till afternoon, was later adjourned for the day after four disruptions caused by the uproar following the Congress’ demand for action against foreign minister Sushma Swaraj  for her links with Lalit Modi.

While Congress senior member Ananda Sharma raised the issues of Lalit Modi-gate and demanded a discussion on the issue in Upper House, V Hanumantha Rao, Congress member from Telangana, displayed banner seeking removal Sushma Swaraj from cabinet which threw the house into a din forcing the chair to adjourn the House. The following is timeline of parliament session today.

3:17 pm: Rajya Sabha has been adjourned fourth time and  for the day, following uproar over the Lalit Modi issue.

1:30 pm: Leading the opposition protests, Congress members forced three adjournments in the pre—lunch session making both Question Hour and Zero Hour a casualty, even as Leader of the House Arun Jaitley offered an immediate discussion and said Swaraj could make a statement on the issue.

The bypoll was necessitated following the resignation of K D Singh after he left Jharkhand Mukti Morcha (JMM) and joined Trinamool Congress.

Akbar, whose term will expire next year, had defeated Haji Hussain Ansari of the JMM by 19 votes.

1:10 pm: Leader of the House Arun Jaitely says the government is ready for a discussion and Ms. Swaraj would also make a statement on the issue.

1:05 pm: Jaitley says the government gets a distinct and clear impression that Opposition wants disturbance, they don’t want a discussion

1:00 pm: Govt. is ready for discussion in any format, at any time: Finance Minister Arun Jaitley on Lalit Modi controversy.

11:23 am: Lok Sabha adjourned for the day after obituary references.

11:20 am: Lok Sabha adjourned for the day after obituary references.

11:15 am: Just at the start of the session, the Congress has started targeting Modi’s NDA government over the Lalit Modi issue. “All Modi’s promises over transparency and accountability are being questioned. Government changes but not laws. A minister told UK government to sanction Lalit Modi’s travel document’s over some humanitarian grounds,” Congress leader Anand Sharma said.

11:00 am: Obituary references read in both Houses of Parliament.

11:00 am: Monsoon session of Parliament begins.