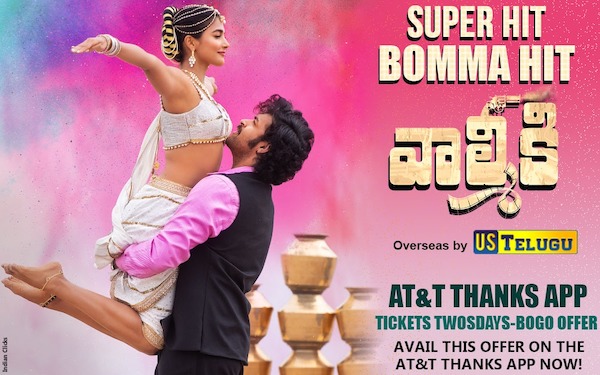 The release of Varun Tej-starrer Valmiki has been received quite well! With positive reviews coming from all quarters for both the performances as well as the narrative style, the film opened quite well.

Alongside the audience reviews, several leading names from the industry have said good things about the film. In fact, director K Raghavendra Rao was one of them and was all praise for the recreated song Velluvachi Godaramma that was originally conceived by him.

Super Star Mahesh Babu watched the film and appreciated it on his twitter handle.

Thoroughly enjoyed watching #GaddalaKondaGanesh! @IAmVarunTej as Ganesh was exceptional👌 Great work by @harish2you and @14ReelsPlus 👏👏 Congratulations to the entire team on the well-deserved success 👍👍👍

Leading distributor of Telugu cinema overseas US Telugu gave the film a massive release in the US and now the audiences can avail this offer to watch the film.

Watch this successful mass entertainer now in theatres near to you!