The Jaganmohan Reddy government has transferred nearly 16 Deputy Superintendents of Police (DSPs) to prime locations. This has given rise to lot of disappointment and discontent internally in the police department. Nearly 17 DSPs belonging to the backward classes are kept in Vacancy Reserve by YCP for the last seven weeks. This punishment was given to them along with 12 Kamma DSPs for their alleged favouritism to the then ruling TDP.

Now the so-called pro-TDP BC DSPs are arguing why they are not being given at least unimportant postings called loop-line jobs in the department. Political harassment and caste bias are usual but that is confined to a few days. Like never before, the Jagan Reddy government is taking political revenge against the police officers on the pretext of their past record.
The BC DSPs are raising the point that YCP’s main target is Kamma officers who are facing it but this shock treatment is given to the BC officers as well. I has never happened before in any other state that DSP level officers are humiliated for long. This has raised frustration in them. Moreover, these officers are being used for duty in bandobust and security to VIPs during assembly sessions and other major events. If this is the situation in the police department, one can think about the level of bias and partiality in other departments. Ruling party leaders are forcing their local politics on all matters of administration.
Telugu360 is always open for the best and bright journalists. If you are interested in full-time or freelance, email us at Krishna@telugu360.com 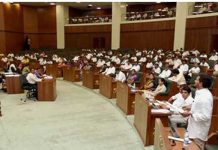