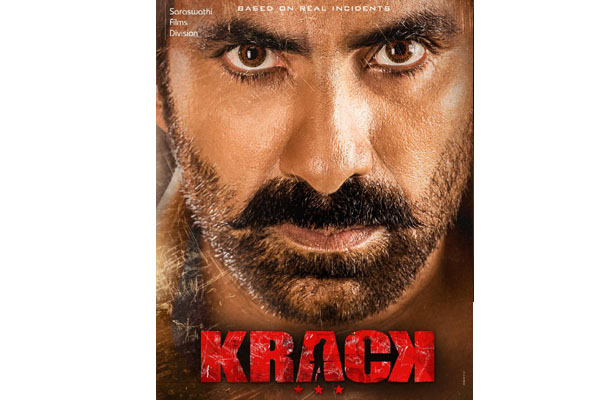 Mass Maharaj Ravi Teja has been struggling for the right success and he pinned all his hopes on Krack, a mass entertainer that is packed with action. Ravi Teja and Gopichand Malineni are teaming up for the third time after Don Seenu and Balupu. Shruti Haasan is the leading lady and Thaman composed the music. The film faced financial hurdles and the release got delayed today. Krack released with the night shows across Telugu states. Here is the complete review of Krack:

Krack is the story of Pothuraju Veera Shankar (Ravi Teja), a ruthless cop who deals three different goons in different locations. One among them is Yasin Bhatkal (Chirag Jani), a most wanted terrorist. Shankar heads for a clash with Katari Krishna (Samuthirakani) who commits several crimes in and around Ongole. Krack has nothing new to offer with the plot as it is based completely on a regular commercial Template of Telugu cinema. The film heavily banks on action and the heroism of Ravi Teja.

Gopichand Malineni who relied on the entertainment switches genre and proved that he can deliver an out and out mass entertainer. Krack is a perfect comeback for Ravi Teja and his comic timing, performance have been top-notch. The first half banks on action and elevation episodes. The film also gets some exceptional actors on board and they delivered their best. All the episodes between Ravi Teja and Samuthirakani have been top class.

Varalakshmi Sarathkumar, Ravishankar, Devi Prasad, Sudhakar and Vamsi Chaganti did their roles well. The interval episode elevates the film completely and the first half of Krack is a perfect package that will appeal to all the sections of the audience. The songs are good and they are shot well. Thaman and GK Vishnu are the heroes behind the Scene for Krack.

The second half carries the momentum of the first half and two big action episodes make the film passable though the second half of Krack sounds completely predictable. Ravi Teja completely carries the film on his shoulders. Gopichand Malineni will surprise you and he excelled with his presentation. The songs in the second half too are strictly average. The Ongole bus stand fight along with the climax stunt stands out.

Ravi Teja is back with a bang and he carried the entire film on his shoulders. His comic timing has been exceptional and the veteran actor took enough care on his styling especially during the elevation episodes. Shruti Haasan has a meaty role but she does her part well and has prominence. She lost her charm on screen and should work out on her looks. The family thread looks decent. Shruti Haasan’s fight in the second half sounds like the director took too much liberty. Samuthirakani is the other highlight of Krack. All the other actors did their parts well.

Krack offers nothing new with the script as it comes with a regular commercial template. The action episodes are exceptional and they elevate the film well. Thaman’s background score takes some of the episodes to the next level. GK Vishnu’s cinematography work stands out throughout. The second half of Krack has no scope for entertainment and it continues on a serious note. The production values are good and the songs are strictly average. The production values are decent. Gopichand Malineni does his job well with Krack.

Krack is a perfect comeback for Ravi Teja and the film will end up as a paisa-vasool film during this sankranti holiday season. Full marks to Ravi Teja, action episodes, background score and the cinematography work. On the flip side, regular plot and predictable narration are the drawbacks. Catch up Krack in single screens during this festival season to experience a perfect mass entertainer after a while in Tollywood.