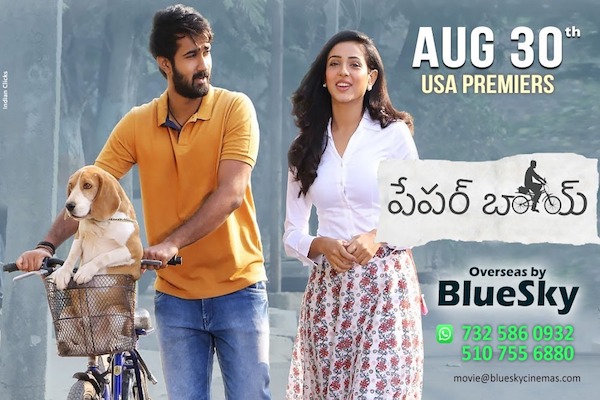 BlueSky Cinemas one of the leading overseas distribution company is now bringing another romantic entertainer Paper Boy into overseas market.

Director Sampath Nandi has given script to this film and also being Produced by himself under Sampath Nandi Teamwork’s Production house. Santosh Shobhan and Riya Suman are playing in lead roles followed by Posani Murali Krishna, Jayaprakash Reddy, Bithiri Sathi etc.

Teaser got 2 million views and trailer released couple of days got very good response too with one million views even though the the leading pair is new to industry. Already inside talk is very positive.

Movie is being directed by debutant Jaya Shankarr and music is being composed by Bheems and already released getting very good response.

Our sincere thanks to Sampath Nandi garu for giving this opportunity to BlueSky and also thanks to Vizag distributor Bharath for watching this film and recommending us.

Enjoy this Labor Day long week end with this cool breeze romantic entertainer with all theaters prices less than $12 and morning shows even less than $10.