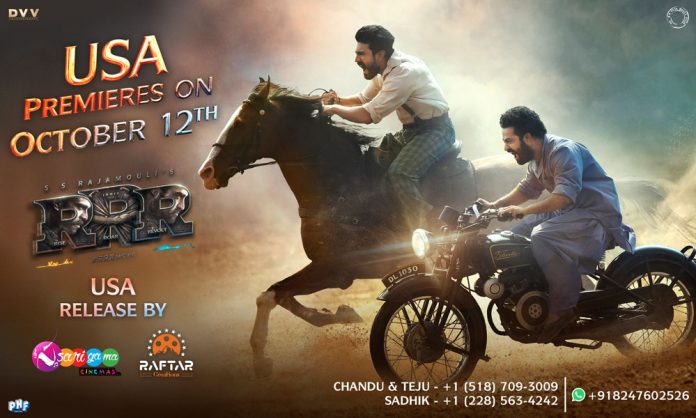 Sarigama Cinemas & Raftar Creations to present much-awaited RRR to audience in the US.

Director SS Rajamouli’s magnum opus RRR is definitely the most awaited film pan India in 2021. After all, the entire nation is waiting to watch what the visionary filmmaker has up his sleeve for them after the massive success of the Baahubali franchise of films that kept untied the entire nation.

So far, team RRR has unveiled the glimpses of actors NTR as Bheem, Ram Charan as Ramaraju, Alia Bhatt as Sita and Ajay Devgn in a key role, all to a viral response from all across.

And taking the buzz around the film to an all new level is leading distributor of Indian cinema overseas, Sarigama Cinemas & Raftar Creations, purchasing the rights to distribute the film in the US across languages.

Touted to be a historical fiction action entertainer, RRR tells the fictional story of Telugu freedom fighters Alluri Sita Ramaraju and Komaram Bheem’s journey before their fight for freedom. With an ensemble cast that has the who’s who of Indian cinema as a part of the cast and crew, this film is surely going to leave the audience spellbound with its scale and magnanimity.

All set for a release on October 13, 2021, release, RRR is India’s biggest film and has a star cast that pans across languages. The film is set to be released in Telugu, Hindi, Tamil, Malayalam and Kannada amongst many other Indian languages.

In the US, Sarigama Cinemas & Raftar Creations have planned grand premieres at record number of locations. The release will be massive and on a higher scale than ever experienced by Indian cinema lovers of the region.

With the best cinematic experience promised with a release in Dolby Vision and Imax, RRR is surely going to be a film the audience will be excited about.

Sarigama Cinemas & Raftar Creations would like to take this opportunity to thank producer DVV Danayya of DVV Entertainments, director SS Rajamouli and the entire team of RRR for joining hands with them and trusting with such a massive release.

A shout out to Ahmed Golchin of Phars Films for lending unending support.