Switch to: తెలుగు
Home Politics Telangana and AP – The Hare and The Tortoise? 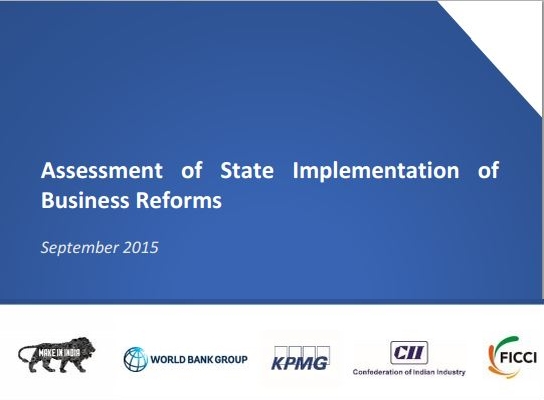 [intro]AP is judged next to Gujarat in a Comparative Study of Ease of Doing Business in 32 States/UTs while Telangana finishes 13th. Is there more to read in this Survey? How objective is the Study? Lessons for the “Hare” and the “Tortoise”[/intro]

The verdict is out and the timing couldn’t have been better. In a comprehensive survey of the best states to do business (measured in terms of 98-point action plan) conducted by the World Bank Group in association with the CII and FICCI and audited by KPMG, Andhra Pradesh finishes second-best state (next to only Gujarat) while Telangana scored the 13th Rank. With both the states completing more than an year since created, the survey holds a real mirror to what’s working and what’s not for businessmen looking to invest. Despite the disparity in the rank, it is interesting  the exercise is generating huge outcries as well as celebrations all over the country losers and winners about the veracity of the rating and assessment of states and UTs.

While the assessment has given rise to competition among States and UTs to undertake reforms, what is not in good taste is to trade charges on the objectivity of the ranking. Here’s why, we feel this rating must be used as an opportunity to take stock of the situation rather than worrying about why the rank is so low.

Firstly, the assessment was made based on data collected through a structured questionnaire that was completed by each state and UT Government. It was then validated through a series of in-depth workshops with State Government representatives, and the collection of supporting evidence on each of the parameters of the questionnaire – including rules, notifications, circulars, website screenshots and a variety of other documents. The data was then evaluated in detail jointly to ensure standard yardstick applied for all States.

Secondly, the assessment took stock of the reforms implemented by States in the period January 1 to June 30, 2015 – a period which coincided with the fiscal consolidation of most states as they grapple with state finances as well as plans to raise resources for the new financial year. The assessment has a comprehensive array of 285 questions that dumbed down the procedures that will either impede or impel a business to be set up with ease in a State or UT.

Thirdly, the initiative itself was part of the “Make In India” campaign started by the Central Government and endorsed by the CII and FICCI – the country’s apex industrial bodies to do a deep-dive into the readiness and the effectiveness of the States in creating a transparent and effective regulatory framework that will create growth, employment, reduce corruption and spawn Make in India initiatives across entrepreneurs. There is nobody here, not even PM Modi who can influence the overall results and findings because what you see is what you get. Currently, India’s rank itself in the World tables for Ease of doing business is an abysmal 142nd . So, the Central Government embarked on an ambitious initiative to map this ease down to the State level because that is where the tyre hits the road and the tendency to kick the can is high. So, the 98-point Action Plan is chosen to drill the list of all the factors which show whether the policy reforms at the Centre are percolating down to the the State-level. Take for example, the issue of multiple registration of tax numbers. Surprise, Odisha is one of the three States in India which now have one unique ID for all the State taxes including Entertainment Tax. Important to note, because of non-standardisation, reforms get stuck and the entrepreneurs go round in circles. When this Survey was contemplated, the exercise itself was meant to reflect the reality and the gaps while bringing out a healthy competition between various States competing for investments. Overall, this is expected to improve India’s Global Rank in the Top 50.
[pullquote position=”left”]Feedback is the breakfast of Champions. So, it is good for both the states to take this Report in its stride.[/pullquote]
Fourthly, there is nothing subjective nor incriminating in the Survey which seriously elevates one state at the cost of another. The survey divides 32 states into ranking based on an overall score which is scientifically arrived at after a self-tick on various parameters. By that count, AP scores 70.12% whereas Telangana scores 42.45%, both of them pipped by Gujarat (71.14%) and Tamil Nadu (44.58%) respectively. It divided the whole list into four categories: States which needed a jumpstart (examples: Bihar and Puducherry), States which required acceleration (Delhi, Karnataka, Maharashtra, West Bengal, Uttar Pradesh and Telangana), States which are Aspiring Leaders (Surprisingly, Gujarat, Madhya Pradesh, Odisha, Rajasthan all these old states share the status alongwith newly-formed states like Andhra Pradesh, Chhatisgarh and Jharkand). The fourth category is that of Leaders in which the survey doesn’t name anybody.

Lastly, the survey is not just comprehensive but also complements the States for the best practices which gives a good benchmarking for the benefit of all the States vying with each other for the best. At the same time, it signals wherever progress is not happening for whatever reasons despite an inherent advantage. For instance, lets look at Availability of Land. The survey mentions that 20 States including Telangana have comprehensive details of land banks available. However, only Andhra Pradesh, Delhi, Gujarat, Madhya Pradesh, Odisha and Tamil Nadu score positively on both parameters. Again, both Telangana and Andhra Pradesh get the pat for formulating a single desk/single window system with clearly defined timelines for application filing, tracking and approvals but AP scores higher than Telangana for creating a Chief Minister’s dashboard used for effective monitoring of the applications received. Apart from Single Window, the real test of the survey is to see how the two factor markets – land and labor – are dealt with by aspiring entrepreneurs while going through the registration process under various State tax authorities. In case of AP, while all land records are digitized, municipal records remain work-in-progress. Similarly, credit where it is due, Telangana has done a commendable job in enforcing contracts by filling up more than 80 per cent vacant district court judge positions; in Infrastructure, only two documents are required for electricity connections and pollution control certificate is no longer a prerequisite.

In summary, there is an old maxim that what gets measured gets done. The Survey gives a reality check on the pace of reforms at the federal level and how that is impacting the ease of doing business. The Report itself quotes one of the Chief Secretaries, “ The study provides a good benchmark for initiating work towards enabling or facilitating ease of doing business. Sustained and time bound efforts would need to be undertaken to make this a long-term success.” There is a scope for vast improvement for Telangana and a need to speed up reforms not taking the state-of-the-art infrastructure in Hyderabad for granted, as per the Survey and right now, Andhra Pradesh is basking in the glory of being voted as next-best after Gujarat despite inheriting a greenfield capital and almost non-existent infrastructure. Feedback is the breakfast of Champions. So, it is good for both the states to take this Report in its stride. It doesn’t help the cause to question the credibility of World Bank or CII – most of the States that surged ahead in the past rankings by KPMG have become magnets for New Investments, they were not cribbers, they were doers.