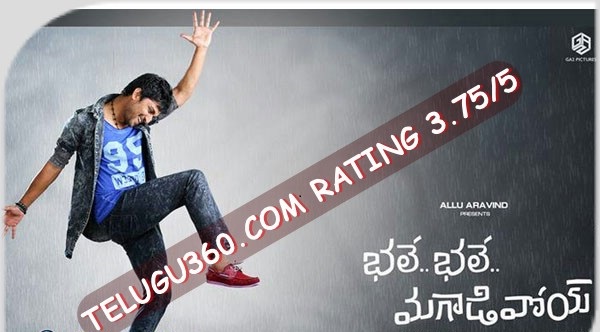 [intro]Director Maruti creates a U-Clean film that will draw youth as well as family audiences, who  didn’t warm up to his earlier films. Natural Star Nani scores  the second super-hit of the year.[/intro]

It is quite rare for a director caught in trappings of making obscene and flippant films to outgrow them and make a convincing family entertainer. But that’s what this film Bhale Bhale Magadivoi is – an extra-ordinary family entertainer of 144 minutes with towering performances by a fresh starcast. If anybody had preconceived notions about Maruti as a film-maker who makes you laugh with silly plots and midnight masala gags, BBM is a revelation of sorts. Maruti has transformed his style of comedies to reflect refined tastes of a family audience perhaps due to the presence of Nani as the hero and Allu Aravind as the presenter. Yes, BBM is a non-stop entertainer that pulls out all stops to make you laugh and cry at times with vastly improved production values – and Nani gets his second hit of the year after Yevade Subramanyam.

The story is not new but the treatment is fresh and energetic filled with metric tonnes of humor that makes you ROFL. Lucky (Nani) is an agricultural scientist who forgets things easily. Not the variety that makes one a Ghajini or a patient of Dementia or Alzheimer’s but something that looks dangerous yet fleeting enough to retrieve oneself. Any task that is assigned to him or an appointment to meet gets messed up because Lucky’s mind gets diverted by some other thing when he is stopped in his tracks by some other thought. A good dimension to explore creatively – and Maruti makes capital of this aspect of memory-loss with a brilliant screenplay that stretches a normal love story weaved around Lucky’s character into a gripping story. Lucky falls in love with Nandana (Lavanya Tripathi) one day as a mind-diversion, and his life changes forever after that – with a prospective father-in-law Murali Sharma and his cute daughter Nandana. Lucky covers up the follies committed out of  his forgetfulness into virtues that get extolled by Nandana – which lead to many unintended hilarious consequences. The first half creates some Woody Allen-type comedy while the second half recreates Shakespearean touch of a comedy of errors with telling humor.

The story is predictable after the first half and lags a bit post-interval as the director beats it up to drive home the same point without newness. But the overall effect is, by far entertaining and packs unlimited humor without the grand-daddy-presence of Brahamandam. Maruti is known for a good sense of humor – and the film blends situational humor into the funny characterization of hero Nani as Mr Forgetful with a host of actors like Srinivas Reddy, Vennela Kishore, Praveen adding to uproarious laughter. Nani and Lavanya Tripathi sizzle as the lead pair with a good chemistry. But the actor who steals the show is Murali Sharma, as the father of Nandana. After spending almost a decade in Tollywood and doing many forgettable roles, lady luck smiles on Murali Sharma finally. Seen throughout the length of the film as much as Nani, Murali shines with his baritone voice and million-buck lines. This film will mark a career-turning point for him and we could see more of him in Tollywood.

[pullquote position=”left”]Nani has been treading the road less traveled so far – and this film will get his stock up again.[/pullquote] As a character with incurable forgetfulness, and yet loves a girl of his dreams, Nani plays many shades with ease, he is betting on movies with good content and this film proves he means business better than most heroes who still can’t figure out a good script from a bad story. Content is one thing, but content-management is another – Nani is becoming adept at sublimating himself to a good story with intrinsic content and a good starcast. In his last film, he let someone like Vijay Devarakonda steal the thunder. In this film, he makes Murali Sharma walk away with honors – how many heroes have this kind of guts? That’s why he is special. He can mint comedy, sadness and romance with equal confidence and have a swagger that doesn’t put you off – and this film is testimony to his versatility. However, one thing Nani needs to watch is the monotony that is creeping into his voice modulation. Most of his antics involving voice modulation are becoming banal because he speaks with the same volume without changes in texture. His experience as an RJ should let him build layers of improvisation on his voice culture. Lavanya Tripathi is quite fresh and cute in her demeanor and looks – and should give a run for money to many of the existing top-slotted heroines who cannot show nuanced emotions. [pullquote position=”right”]With a one-corner dimpled face and a vivacity that strikes you in all varieties of costumes, Lavanya can go places with her screen presence and sparkling expressions.[/pullquote] Sometimes glamor is not just over-exposure and overkill as the heroines make it out to be; Lavanya has rekindled the essence of a promising heroine. For both Nani and Lavanya, the color-coordinated dressing in blue color enhances their natural vibes with each other on screen.

Music by Gopi Sundar enhances the watchability of BBM. The man who composed the music for Bangalore Days gives a fresh music with a distinct sound  to Tollywood audience who are used to unimaginative music arrangements. In the quest for speed and rhythms, most music directors stopped using simple chords, chorus humming and traditional instruments in today’s songs. More so, they are not giving a chance to new voices. In the five songs which are all set in different tempos but simple melodic mixes, Gopi Sundar tries Mandolin, fusion music in the Endaro Mahanubhavulu and fresh voices like Renuka Arun. Despite the mix-up in pace of songs, ranging from slow to fast beats, nobody got up from the seat for any of the songs yet they looked fresh in choreography as well as visually. Mottamodati Saari is also rich and fresh-voice-rendered number. The range of music and the BGM scores suggest Gopi Sundar can go a long way, provided our success-seeking film-makers give him more chances. Cinematography by Nizan Shafi shows Maruti’s film in a totally different and respectable light. From the first film Eerojullo to now, Maruti has shown the most-stupendous transformation.

The director puts a disclaimer at the start of the film with an Alfred Hitchcock quote: “When Drama begins, logic ends.” Perhaps, he is mindful that some of the criticism can come his way for his treatment of the hero’s medical condition. As the drama gets into an overdrive, you get an idea that nobody wants to have hero Nani get examined by a doctor for any cure for his malaise. These days, your own smartphone can be programmed to remind yourself out of any situation. But nobody, neither his father or mother, or his lover ever get the thought to explore a cure for his mental condition or see a doctor. And there is no attempt from Nani to regroup himself for navigating life. It could be a multi-tasking addiction – this creates some contrived humor at times but the overall message is clear: Despite memory-loss and related problems, you can overcome everything with good ambition, the love of near-ones and a ray of hope for the future. Maruti has delivered this message with a subtlety and light-heartedness that will surely win him more family audiences than he ever got in his career so far. Commercial format keeps changing all the time but this film will stun all the critics of Maruti – he created one helluva of a family entertainer with an outstanding comedy touch. The climax scenes remind you of many recent Tollywood films but the grip continues almost till the end. Watch it with family  – it is going to be loads of fun and the best entertainment of the year so far.