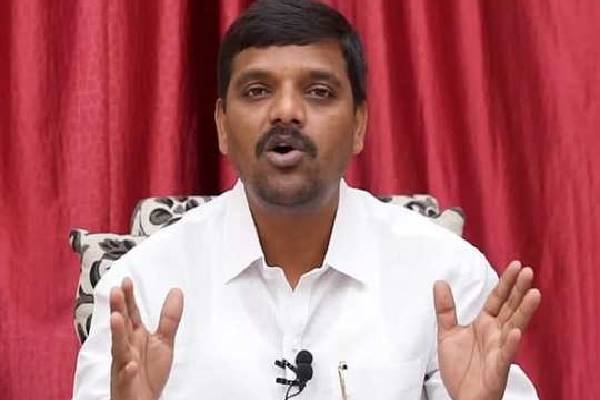 Everyone knows that Teenmaar Mallanna has decided to join BJP to save himself from police cases filed against him by the TRS govermnent.

Teenmaar Mallanna was kept in jail for three months from August to October after TRS government filed dozens of cases against him in various police stations across Telangana for blackmailing people, extorting money using his Q News YouTube channel.

He came out on bail recently. When he was in jail, Mallanna’s wife met union home minister Amit Shah and complained against TRS government stating that they have filed false cases against him as Mallanna was fighting against KCR and TRS government’s anti-people policies.

Mallanna’s wife then announced that Mallanna will join BJP soon.

After she met Amit Shah, the BJP leaders in Telangana extended financial and legal help to Mallanna to come out on bail.

As promised earlier, Mallanna joined BJP today and vowed to defeat TRS in the next Assembly elections and bring BJP to power in December 2023.

But TRS government continues to pursue cases against Mallanna in courts.

Mallanna is confident that TRS can’t touch him as he is now a BJP leader and he can take on KCR and TRS more aggressively.

But can BJP saves Mallanna from TRS government as the police department is planning to challenge the bail granted to Mallanna who is booked under various cases.

Teenmaar Mallanna was shifted to Chanchalguda jail on Saturday (today) after Secunderabad court remanded him in judicial custody for 14 days.

He was arrested by Chilakalaguda police station on Friday in a late night secret operation and produced in the court on Saturday.

Teenmaar Mallanna was arrested on charges of demanding Rs 30 lakh money from astrologer Lakshmikanth Sharma and threatened to kill him if he fails to pay the amount.

Sharma filed a complaint with police stating that Mallanna uploaded fake news on his Q News YouTube channel about his astrology and when he approached him to remove those videos he demanded Rs 30 lakh.

Through Q News channel, Teenmaar Mallanna has been aggressively taking on KCR, KTR and their family members and exposing the corruption of ministers and TRS MLAs and other TRS leaders every day.

Astrologer Sharma filed a police complaint in April this year based on which Mallanna was arrested after four months.

Surprisingly, KTR reacted on Teenmaar Mallanna’s news channel for the first time while addressing a press conference in Telangana Bhavan on Friday afternoon.

Without taking Teenmaar Mallanna’s name, KTR said some journalists are abusing KCR and his family members in the name of freedom of press and the law will take its own course on such persons.

Surprisingly, within hours of KTR’s comments on Friday, Mallanna was arrested late night on Friday.

Chilakalaguda police have sought 7-day remand of Mallana for questioning in this case.

Various journalist organisations in Telangana strongly condemned arrest of Mallanna alleging that TRS government is trying to scuttle the voice of journalists and media organisation who question TRS government’s corruption and failures in the past seven years.

Contesting as an Independent candidate in the recent Graudate MLC election in March this yeear, Teenmaar Mallanna gave a tough fight to TRS candidate Palla Rajeshwar Reddy, though Mallanna lost the election.

Is Teenmaar Mallanna moving closer to the BJP in Telangana? This is the impression one got when the whole episode of the police raid on his Q News Channel office in Uppal’s Medipalli happened. As soon as the police reached the office to conduct a raid on Teenmaar Mallanna’s Q News office, several BJP leaders began protesting against the cops.

BJP MLA Raghunandan Rao of Dubbak, former MLA NVSS Prabhakar, BJYM state leader Bhanuprakash and several others rushed to the spot and began protesting against the raid. The raids began at about 7.30 PM on Tuesday and continued well past Wednesday morning. The police seized the equipment, hard discs and computers from the office. The raids were conducted on the basis of a complaint filed by one Jamalapuram Priyanka, who alleged that Teenmaar Mallanna aka Naveen Kumar was trying to assassinate her character.

Around 40 cops, most of them in mufti clothes, conducted the raid. As the news broke out, BJP leaders rushed to the spot to express their solidarity with Mallanna. It was surprising to see Raghunandan Rao and other leaders rush to his defence. Similarly, pro-BJP Velugu daily too covered the raids extensively. In fact, Mallanna is a past employee of the V 6, owned by the same management. Mallanna, who has been extremely critical of the TRS and KCR, has shot into fame with his satirical videos and had emerged second to winning TRS candidate Palla Rajeshwar Reddy in the recent Graduate MLC elections to Warangal-Khammam-Nalgonda constituency.

There were allegations that the BJP had funded and supported Mallanna in the MLC elections ignoring its own candidate Premender Reddy. The way the BJP leaders rushed to support Mallanna has only confirmed these rumours. 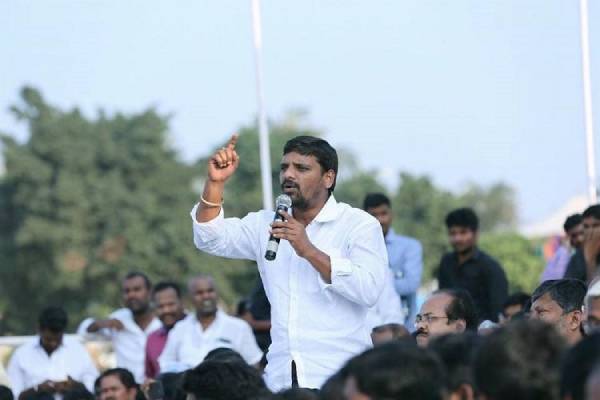 The BJP is known for its unity, sense of purpose and organisational loyalty. Even when the party had few seats, the unity was stark and the party leaders spoke in one voice. But, not anymore. The BJP in Telangana is divided. The leaders are speaking in different voices these days. The reason? The reason is one person who doesn’t belong to BJP, nor does he share BJP’s ideology.

The man in question is Navin Kumar. Now, that name doesn’t quite ring a bell for Navin Kumar is better known as Teenmaar Mallanna. A section of the party is said to be having a soft corner for Teen Maar Mallanna on caste lines. Though Mallanna does not share BJP’s ideology, some leaders are said to be financially backing him and his activities. Even during the recent Graduate MLC elections, these leaders are said to have funded him due to caste considerations.

After this, the party’s central leadership is said to have called for an explanation. To add to the woes, after the elections, Mallanna has stepped up criticising the BJP and its policies. Those who have complained to the national leadership have reportedly told them about Mallanna’s recent criticism of the BJP. They have reportedly told that a section of the party is still funding Mallanna. 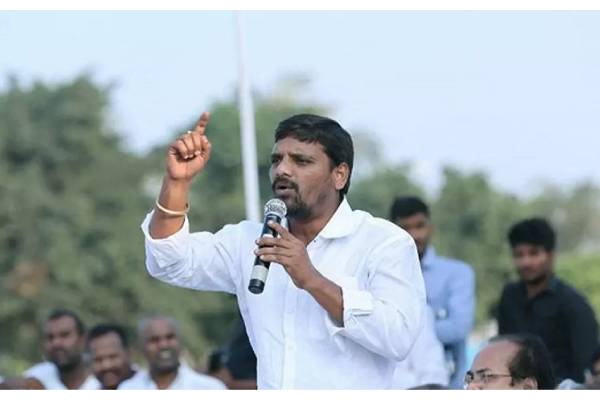 Teenmaar Mallanna has become a sensation in Telangana politics during the recent graduate MLC polls.

During the counting of votes that took place for four days, at one stage there were reports that Mallanna had almost won but he lost narrowly in the second preference votes.

In this backdrop, speculations were rife that Mallanna will join either Congress or BJP or launch his own party to dethrone TRS.

However, Mallanna on Sunday (today) clarified that he has no plans to start his own party and continue to fight independently against the anti-people, anti-democratic KCR’s government in Telangana.

Mallanna said he will expand “Mallanna Team” across Telangana by setting up village, madal, district and state-level committees to fight against TRS government.

Mallanna also announced to undertake 6,000 kilometre padayatra across Telangana soon to reach out to people and resolve their problems by bringing pressure on TRS government.