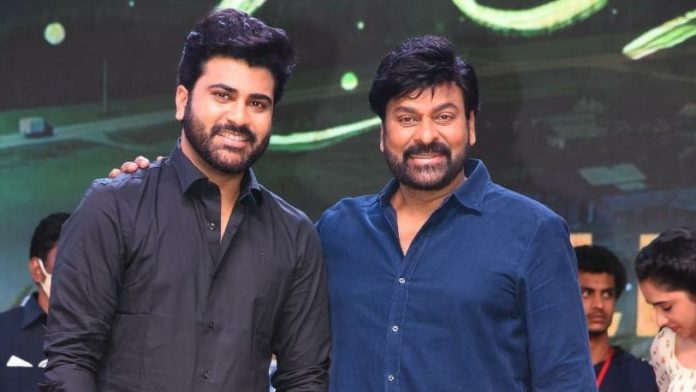 Sharwanand took the blessings of Chiranjeevi by touching his feet. He recalled how he made his film debut with Shankar Dada MBBS which was a first hit of him too. “Sreekaram has already become success, the moment he accepted to attend the pre-release event. He once told me if your will power is strong, then god will rewrite your fortune. I memorize the golden words every day. That willpower indeed made me a star.

After the trailer release, my friend Ram Charan called me to ask whether I needed any support for the film. He then called Chiranjeevi requesting to support the film. Charan has inherited the real character of Chiranjeevi. I’m always indebted to Chiranjeevi and Ram Charan.

Sreekaram has all the commercial ingredients like love, adequate comedy, sentiment, beautiful girl and a protagonist who revolves around these.

Chiranjeevi said, “Exactly 12 years ago, I campaigned here in Khammam as part of Praja Ankita Yatra, and the response was overwhelming. Charan called me and requested me to attend pre-release function of Sreekaram. I then told him that how’s it possible as I was in Khammam. Charan informed me that they will hold the function in Khamma.

It’s a wonderful story that tells the significance of agriculture. However, it will have all commercial elements. Sharwa is the main reason for me to attend the function. Sharwa is like my son. He used to come to my house regularly when he was a kid. He’s a close friend of Charan. When we wanted a young actor for Thumbs Up ad, I asked Sharwa whether he would do it. He said okay and we acted together.

Sharwanand then did a guest role in Shankar Dada MBBS. I then realized that Sharwa will become a star one day. He has been growing as an actor for every film. I could watch 9 minutes of the film and I can confidently say that, Sreekaram is going to be a huge success. Kishor made this film in a commercial way. I wish the entire team all the success.”