Arjun (Nithiin) and Anupama (Keerthy Suresh) are neighbors and childhood friends. Anu is a merit student and Arjun’s father (Naresh) always belittles him by comparing his scores to Anu’s. Eventually Arjun resorts to unscrupulous methods to clear the engineering final year exams and ends up with a good GMAT score. A few unexpected events result in the couple getting married and move to Dubai for higher studies. The rest of the story showcases their marital life and their acceptance of life together as a married couple.

‘Rang De’ is a light subject to work with. Director Venky Atluri narrated it in comfortable fashion. However, at times, it feels like the plot is over simplified. The movie begins with a quick introduction of the lead characters, their families and their characterizations. The first half is mostly comedy woven around Nithiin’s struggle with academics and GMAT. Actor Brahmaji’s foreign education training center episodes are hilarious. The mutual teasing episodes between Arjun, Anu are reminiscent of early 2010s. Arjun and Anu marrying is an interesting twist as the feel good first half ends.

In the second half the story shifts to Dubai, as the newlywed couple pursues higher education in Dubai. Vennela Kishore as Adivi Sastri tries to generate some fun with partial success. The supposedly emotional conflict between the lead pair flatlines with poor characterization and poorly established relationship. There is no rhyme or reason to why their marital relationship takes so many confusing turns. Arjun doesn’t want to consummate their marriage, then changes his mind pretty quickly. Anu goes back and forth on the relation as well. Such frequent shifts fail to make the emotional impact with the audience

Arjun character is tailor made for Hero Nithiin. Keerthy Suresh has lost some pounds and looks good as Anu. As expected, both the lead actors did a good job playing their roles. Naresh as hero’s father and Rohini as the heroine’s mother are adequate. Suhaas and Abhinav played hero’s side kick roles and Abhinav scored well with few of his one-liners.

Rang De is a routine but entertaining film in which first half appeals to the youth audience, whereas second half appeals more to the family audience. Overall, with no heavy dose of sentiments, this predictable film goes easy on audience mind and is watchable. Unconvincing lead pair characterization fails to connect with the audience emotionally. With two hour six minute crisp run-time, ‘Rang De’ is a okay film to try. 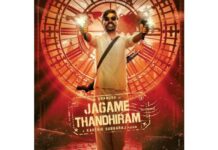