AP Minister Peddireddy Ramachandra Reddy, his son and MP, P V Midhun Reddy, escaped unhurt in a road accident near Rayachoti in Annamayya district on Monday. A vehicle in the convoy was badly damaged and two persons were injured in the accident.

The incident occurred at Chennamukkapalle of Rayachoti mandal when the father and the son were going to visit one of their relatives for the festival. A vehicle coming in the opposite direction had hit one of the vehicles in the convoy.

A personal secretary and a security person were injured in the incident as the vehicle in which they were travelling turned turtle in the mishap. The two received grievous injuries and were admitted to the government general hospital in Rayachoti town.

The family members including the Minister and his son MP, were travelling in the convoy and they were not hurt as their vehicle passed by when the private vehicle coming in the opposite direction hit the vehicle in the convoy.

As the minister and the MP were safe, the district officials heaved a sigh of relief.

The infighting in Andhra Pradesh’s ruling YSR Congress Party (YSRCP) in Sri Sathya Sai district came to fore on Saturday when a group of party men stopped a minister’s convoy and showed slippers.

The incident occurred at Penukonda when Energy, Forest and Environment minister Peddireddy Ramachandra Reddy was on a visit to the district.

A group of dissident leaders and workers of YSRCP had gathered near Srikrishna Devaraya crossroads on national highway 44 to meet the minister and submit a memorandum against the “rival” group. On learning about this, supporters of local MLA reached there. This led to tension in the area.

Police rushed there and tried to disperse both the groups. As soon as the minister’s convoy reached there, the dissident group raised slogans and tried to stop it. There was a stampede-like situation. In the melee, some of the protesters showed slippers towards the minister’s vehicle.

The police cleared the way for the minister’s convoy by removing the protesters.

The AP claimed that the TS government has to pay the power charges of Rs 3,000 crore and the interest of another Rs 3000 crore to Andhra Pradesh Discoms. The AP had been representing the case ever since the bifurcation, particularly after the capital was shifted to Amaravati in December 2014, six months after the appointed day, June 2, 2014.

It is to be seen how the Central government would react to the fresh statement of the Telangana chief minister on the power dues to Andhra Pradesh.

Why is this No.2 in Jagan cabinet undertaking hectic tours?

Andhra Pradesh minister Peddireddy Ramachandra Reddy is considered as the No. 2 in cabinet after Chief Minister YS Jaganmohan Reddy. He is known to be the only minister in the cabinet who can meet CM Jagan without any prior appointment.

Peddireddy got elected as MLA thrice from Punganuru seat in 2009, 2014 and 2019. Peddireddy is undertaking hectic tours in Punganuru constituency all of a sudden these days.

His sudden tours for 15 days at a stretch at this stage is creating doubts among all. This is because there are no elections in AP until 2024.

Moreover, Peddireddy never undertook tours in constituency for so many days even after getting elected thrice.

Speculations are rife that he is doing this to save his minister post in case Jagan reshuffles his cabinet. He wants to project himself as an efficient minister who deserves full 5-year term as minister.

Another talk doing rounds is that Peddireddy is worried about new TDP incharge for Punganuru, Challa Babu who is slowly gaining hold on the constituency with his public outreach programmes.

To counter this, Peddireddy is reportedly undertaking hectic tours in constituency and see that his followers do not switch sides to TDP.

Explosions were carried on Saturday at the quarry.

Locals alleged that the workers did not take any precautionary measures while taking up explosions.

With this, stones were scattered all around and hit the people with high intensity.

An agriculture labourer was working in a field near by at the time of the explosion. A stone from the quarry hit him with high intensity. He sustained severe injuries and died soon.

Locals staged a dharna demanding action against quarry management and compensation to the victim.

They alleged that the minister’s quarry was taking up huge explosions without taking precautionary measures and risking the lives of people.

Minister Peddireddy Ramachandra Reddy has launched a scathing attack on Chandrababu Naidu and Raghurama Raju. He said that Chandrababu Naidu was doing secret deals only to defame the YCP Government. Raghurama Raju was acting like a ‘bantrothu’ for the yellow media which was carrying out all nonsensical statements being made by him.

Peddireddy blamed Rajugaru for ‘reading out’ the script already given by Chandrababu Naidu. The yellow media was distorting the YCP leaders’ statements deliberately. Everybody knew how Chandrababu has earned his property.

Peddireddy challenged Raghurama Raju to resign and go for fresh election if he had really his own strength in his constituency. It was only with the support of CM Jagan Reddy that Raju could become an MP. Otherwise, he would not become even a ward member.

Peddireddy further said that Raghurama Raju had no moral right to criticise the Chief Minister. Chandrababu was not acting like a responsible Opposition leader in the State.

However, the Court directed the Minister to refrain from commenting anything disrespectful to Kumar or undermining the State Election Commission’s respect.

Henceforth, Reddy can speak to the media, obeying the Court’s orders.

His advocate highlighted that the freedom of speech and liberty are fundamental rights enshrined in the Constitution under Articles 19 and 21.

Kumar, earlier ordered the Director General of Police Gautam Sawang to confine Reddy to his home until the end of rural local bodies elections over allegedly threatening election officials.

This order was struck down by the court and now Reddy’s media access has also been restored.

A host of Ministers and ruling Yuvajana Sramika Rythu Congress Party (YSRCP) leaders have assailed the SEC for issuing gag and confinement orders.

Reddy, earlier undermined the SEC that he was ‘after all’ a retired Indian Administrative Officer (IAS) and should not allegedly exceed his powers.

With each passing day in Andhra Pradesh, friction between the state government and Kumar is increasing, leading to a flurry of orders from the latter and a verbal backlash from the ministers and legislators.

Peddireddy defies SEC, come out of house to welcome CM 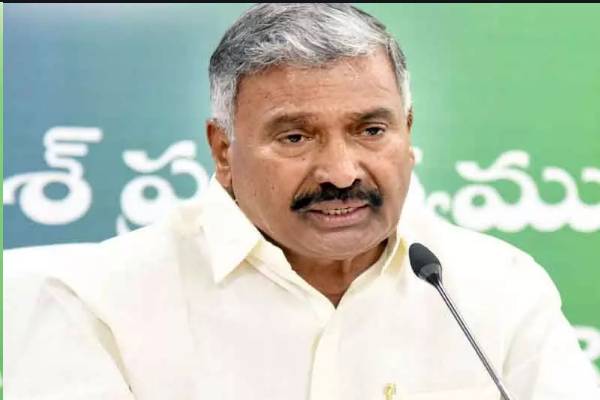 In asserting his loyalty to CM Jagan Reddy, senior Minister Peddireddy Ramachandra Reddy is launching constant attacks and openly violating all orders of the State Election Commission. SEC Ramesh Kumar has ordered the DGP to keep Peddireddy restrained to his home till February 21. But today, the Minister came out of his house to receive Chief Minister YS Jaganmohan Reddy who is coming to Chittoor district as part of the President’s visit.

Peddireddy has visited Tirupati airport. On the other hand, SEC Ramesh Kumar has written to the Union Home Secretary about the flagrant violations by the Minister. The SEC has sought the advice of the Union Home Ministry following non stop attacks by Minister Peddireddy on the constitutional institution of the election commission.

Meanwhile, Minister Peddireddy has moved a house motion before the High Court of Andhra Pradesh on Sunday. He sought cancellation of the SEC orders. From the beginning, Peddireddy has been openly passing critical comments against SEC Ramesh Kumar.

Many other YCP leaders have stopped launching direct attacks on the SEC after the election code came into effect. But Peddireddy continued his all out attack.

The ego battle between the YCP and the State Election Commissioner has turned uglier. Minister Peddireddy Ramachandra Reddy has started a personal level attack at SEC Ramesh Kumar. The SEC is just like any other officer working in the Government. Whereas, the Minister has higher powers. The SEC cannot issue an order for not allowing a Minister to move out of his residence during the elections.

Peddireddy further asserted that Ramesh Kumar would have to appear before the Assembly Privileges Committee sooner or later. There would be no way the SEC can escape from the 3 year jail punishment for all his wrongdoings. Ramesh Kumar was thinking himself to be the President of India.

Minister Peddireddy’s comment on the SEC orders has triggered a huge controversy. The Minister has threatened all those election officials and District Collector who follow the SEC orders would face serious action in future. The SEC has ordered action against the Minister saying he should not be allowed to move out.
Peddireddy now says Ramesh Kumar has been carrying out only the orders of Chandrababu Naidu and they are not acceptable for the YCP. 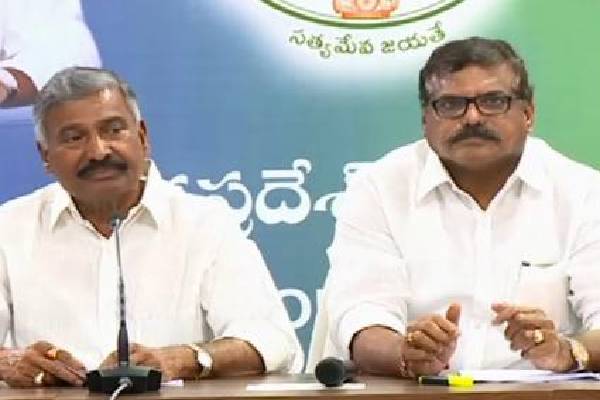 YCP Ministers Peddireddy Ramachandra Reddy and Botsa Satyanarayana have been making all sorts of allegations against SEC Ramesh Kumar ever since the panchayat polls began. In fact, they have started hurling personal abuses on him. One YCP leader even asked how Ramesh Kumar could become an IAS officer in the first place. In return, Ramesh also wrote a letter to the Governor seeking action against the Ministers and Advisors for their objectionable remarks.

Sharply reacting this, the YCP Ministers now took their battle to the next level. They gave a privilege notice to the Assembly Speaker saying that they were being insulted by the State Election Commissioner. They charged that the SEC was obstructing with their duties as the MLAs and Ministers. Consequently, there was total suspense as to what action Tammineni Sitaram would take against the SEC.
Analysts say that as usual, the Speaker would also join the YCP leaders in hurling abuses on the SEC just like how he did in respect of Chandrababu Naidu. But, the issue here is that Ramesh Kumar is also the head of a constitutional institution just like Tammineni. It is not constitutionally defendable on the part of the Speaker to unilaterally target the State Election Commission.

However, the political circles were waiting with a bated breath as to what would happen next. On his part, Ramesh Kumar is stepping up his attacks, telling the Chief Minister and his Ministers that it amounts to violation of the election code to pass needless remarks against the SEC.

The panchayat elections are being held on a ‘partyless’ basis. This means there should be no political interference or participation. But Chandrababu Naidu released his party manifesto for the elections. Quickly seizing this opportunity, YCP Minister Peddireddy Ramachandra Reddy demanded State Election Commissioner N. Ramesh Kumar to take action against Naidu if he was really unbiased.
The YCP has been accusing Ramesh Kumar of being an agent of Chandrababu for a long time now. The TDP manifesto came as a big chance for it to attack the SEC once again.
The TDP manifesto was named ‘Palle Pragathi – Pancha Sutralu’ (Five Plans for Village Growth). After releasing this, Naidu gave a call for all the panchayats to elect his party-supported candidates for achieving better and cleaner villages.
Naidu argued that the elections might be partyless but the political influence would be there in every aspect of life. The panchayat elections were actually indirect in nature and the candidates would be getting support from one party or another.
The TDP’s five plans for village future development would focus on protected drinking water, safety assurance, model villages, self-sufficiency and citizen services with reduction in property tax. Each of the 15,000 panchayats would get Rs. 70 lakh to Rs. 80 lakh funds under the NREGS scheme directly from the Centre. Also, Finance Commission funds were also being directly given to the villages.
Naidu talked as if the villages could function better with their self-government without the need for the State Government funds. Expectedly, Peddireddy reacted sharply to this.