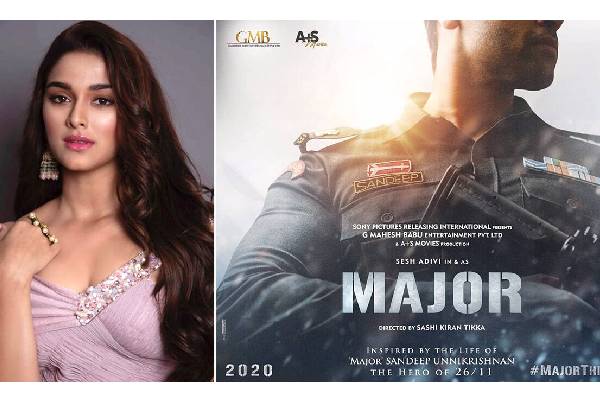 Based on the life of Major Unnikrishnan who was a hero during the 26/11 attacks, Adivi Sesh’s Major is a bi-lingual in Hindi and Telugu. New addition to the film’s ensemble cast is Saiee Manjrekar who is roped in for an essential role.

Saiee Manjrekar, daughter of Bollywood actor and filmmaker Mahesh Manjrekar, made her Bollywood debut opposite Salman Khan in Dabangg 3 and now she is venturing into Tollywood with Major. She will begin her part of shooting from next month in Hyderabad.

A joint production venture of Sony Pictures Films, Mahesh Babu’s GMB Entertainment and A+S Movies, Major is directed by Sashi Kiran Tikka. Sobhita Dhulipala will be seen in another important role in the film planned for summer release in 2021.

Major is a package of surprises says Adivi Sesh 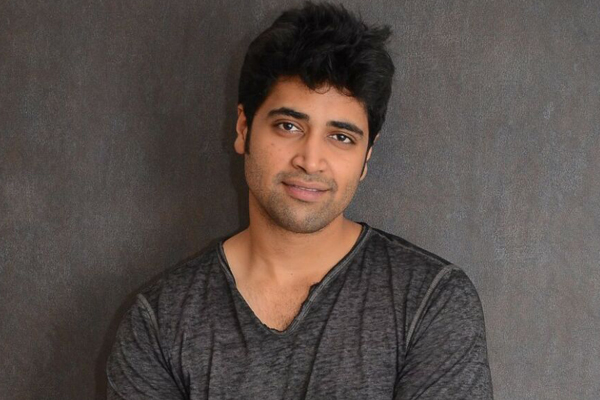 Young actor Adivi Sesh sounds quite consistent in his career. The actor is completely focused on Major, an action drama that is based on the life story of Major Sandeep Unnikrishnan. The film’s shoot is currently kept on hold and the major portions of the shoot will be wrapped up soon. The actor says that the film has a bunch of surprises which are kept under wraps. Along with Shobitha Dhulipala, the film also has another heroine.

The heroine will be kept as a surprise and her name will be announced soon. A massive set is erected in Ramoji Film City for the shoot. Adivi Sesh said that he lost 8 kgs for his role and he is keeping himself fit during this lockdown period. Sesh also interacted with several army officials and some of them will be playing crucial roles in Major. They will be present on the sets during the shoot. Sony Pictures India along with GMB Entertainment are the producers. An official announcement about the release of Major would be made after the lockdown is lifted. The film will have a pan Indian release. 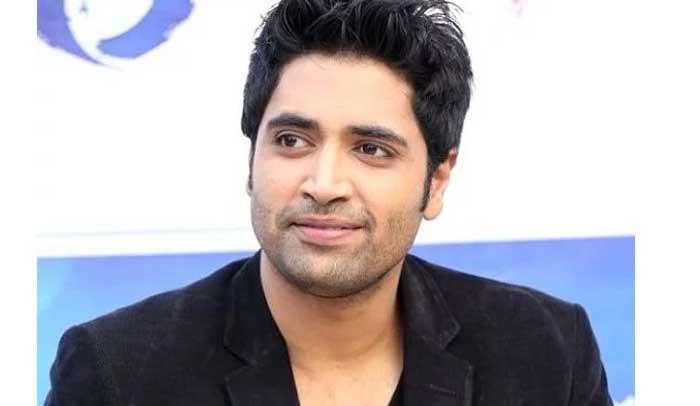 The coronavirus outbreak left the world in lockdown. Tollywood young actor Adivi Sesh is utilizing the break in a perfect manner. He is busy editing the wrapped up portions of Major which completed 40% of the shoot. He is in frequent touch with the director and other technicians through video calls to complete the work. A major schedule of Major got completed at the border recently and the unit canned crucial scenes at a temperature of -8 degrees. A huge set is erected in Ramoji Film City and the shoot commences in the set once the lockdown process comes to an end.

Adivi Sesh in this break is spending time with his father. He is keeping himself by penning the script of Goodachari 2 which will roll this year. After Goodachari ended up as a hit, the focus now stands on the sequel. Adivi Sesh says that the premises are completely interesting and they are working hard to deliver the best. Rahul Pakala will direct the sequel and he worked as the writer for Goodachari and Kshanam. Major releases this year and Goodachari 2 is slated for 2021 release.

Bollywood beauty Alia Bhatt is lined up with several big-budget Bollywood projects. The actress will be playing one among the female leads in SS Rajamouli’s upcoming magnum opus RRR and she would be romancing Ram Charan in this periodic drama. Though she has been receiving numerous offers from the South, Alia Bhatt has no time for those films. The latest news is that Alia Bhatt is approached for one more Telugu project.

Adivi Sesh is shooting for his next film Major which is based on the life story of Major Sandeep Unnikrishnan who lost his life in 26/11 Mumbai attacks. The film is shot simultaneously in Telugu and Hindi languages. The makers approached Alia Bhatt for the female lead’s role and the actress is yet to give her nod. The movie unit feels that Alia Bhatt will bring extra mileage for the project. Sashi Kiran Tikka is the director and GMB Entertainment, Sony Pictures are producing Major. The film releases in August 2020.

Adivi Sesh is one actor who shot fame and rose to a star with back to back hits in the genre of thrillers. His recent offerings impressed all the audience because of the interesting narration and the thrilling twists. He signed Major which is based on the life story of Major Sandeep Unnikrishnan, a real-life hero who lost his life during the 26/11 Mumbai attacks. Sashi Kiran Tikka is on board to direct the film.

The pre-production work of the film is currently in the final stages. Adivi Sesh already lost 10kgs for the role and he will lose 5 more kgs to reprise the role of Major. Abburi Ravi is busy with the dialogue version and a massive set of Taj Hotel (Mumbai) is being erected across the outskirts of Hyderabad. Adivi Sesh is monitoring the pre-production work personally along with the set work of the film.

Major will start rolling from November and will be shot extensively in Hyderabad and Mumbai. Major is aimed for August 2020 release and is bankrolled by Sony Pictures, GMB Entertainment. 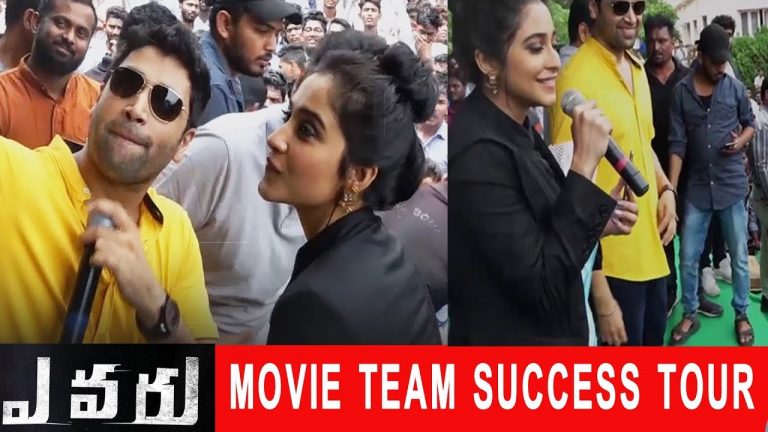 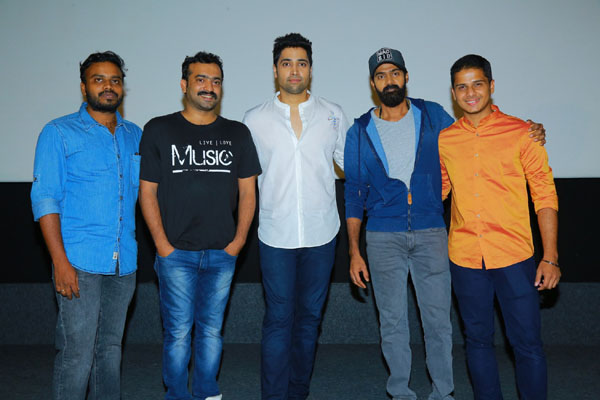 Evaru is an Above Average venture – 11 days worldwide collections

Evaru has an average second weekend as the film has collected a worldwide distributor share of 1.20 cr in it’s second weekend. 11 days worldwide total of the film stands at 9.70 cr, The film can be called as an above average/successful venture as it has gone past the overall valued theatrical rights. Real problem with the film especially in Telugu States is after a good extended weekend it has dropped on weekdays and couldn’t pick up much in its second weekend which resulted in very average collections. The film is a break-even venture in Overseas & profitable in rest of India markets.

Adivi Sesh’s transformation for his next

Young and talented actor Adivi Sesh is riding high with back to back hits. He has turned out to be the hot favorite when it comes to thrillers in Telugu cinema. His recent offering Evaru is having a decent run at the box-office and the buyers already recovered their investments. The actor who worked without major breaks will be off for the next couple of months. His next film Major is currently in the final stages of pre-production.

Adivi Sesh will essay the role of Major Sandeep Unni Krishnan in Major. The actor will be spotted in a lean look and he is currently on a rigorous diet. Sesh will lose 10kgs in the next two months before he starts shooting for the film. Sashi Kiran Tikka will direct this film and Major will be shot in a specially erected set mostly. Sony Pictures along with Mahesh Babu’s GMB Entertainment will bankroll this prestigious project. Major releases next year. 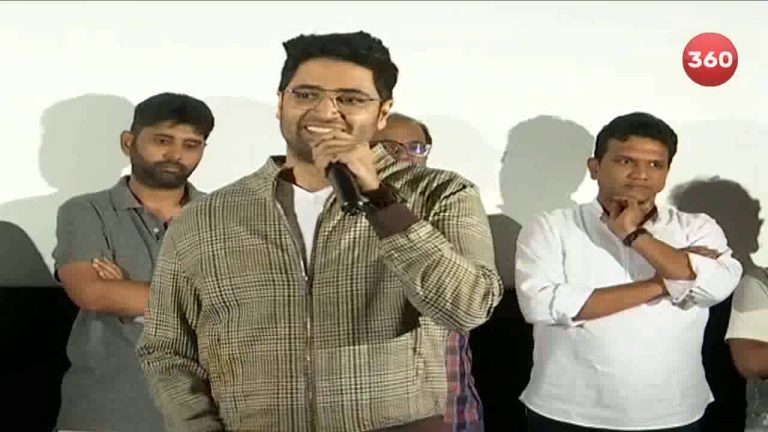 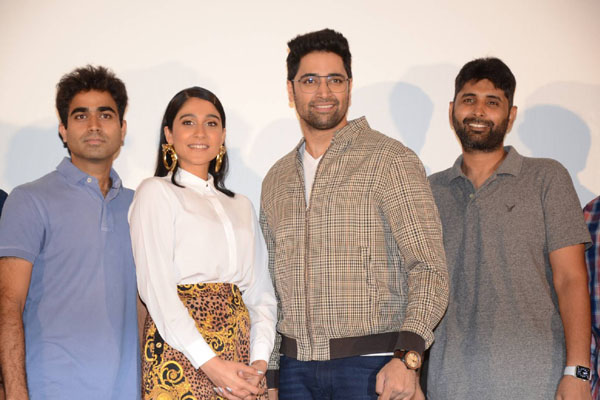 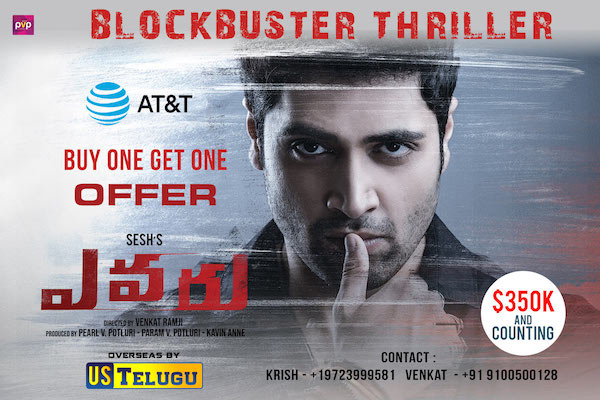 For some reason unexplained, directors of Adivi Sesh’s hit films like Kshanam, Goodachari and now Evaru are unable to lock any new hero for their second Telugu film.

Ravikanth Perepu is yet to do another film since Kshanam has hit the marquee in 2016. Sasi Kiran Thikka hasn’t done any other film after Goodachari, but Sesh gave him the mantle of ‘Major’ movie. Same is going to be the case with Venkat Ramji who carved Evaru movie.

While Ravikanth’s film with Rana never took off, Sasi Kiran is directing Sesh’s Major movie, while Venkat Ramji announced that he will be focusing on Evaru 2 with the same hero. Wonder why they stuck with the same hero rather finding other stars after scoring massive hits?

“As they delivered some stunners with their debut, star heroes expect them to come up with scripts that are much bigger in scope and stamina than their first films. But the script of these directors’ first films has lots of influence and inputs from Sesh, that these directors find it tough to make another such story” says a source in the know.

Whiel Evaru and Goodachari directors are able to lock their next projects, it’s surprising to see Kshanam director yet to make a move. 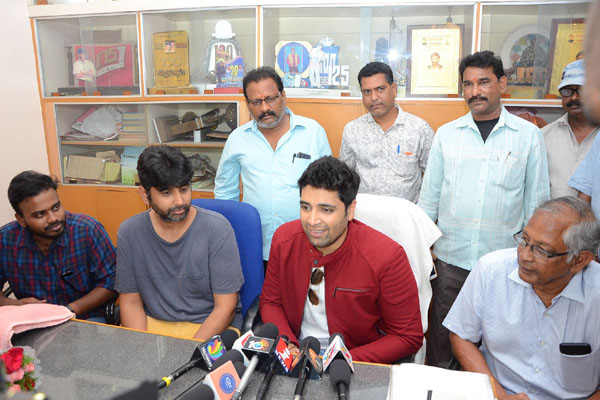 US box office : Evaru emerges as hit, Ranarangam is an outright disaster 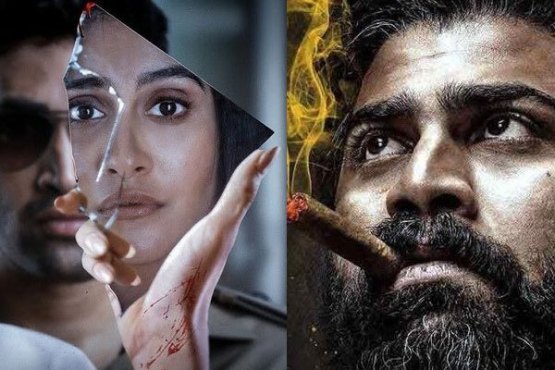 Two medium budget films Evaru and Ranarangam released last week. While Evaru emerged as a decent hit, Ranarangam turned out to be an outright disaster at the US box office.

Adivi Sesh’s suspense thriller Evaru, which received rave reviews and superb word of mouth from all sections of audience, collected respectable gross in the first weekend in USA. After taking a good start with $ 61K from Wednesday premiers and $ 43K from first day, the film added good numbers in the weekend ( $ 73K on Friday, $ 105K on Saturday) to surpass the quarter million mark. By the end of Sunday, the film is poised to collect close to $ 350K in USA. After scoring success with Kshanam and Godachari, Sesh has once again delivered a box office hit with Evaru.

Sharwanand’s latest gangster drama Ranarangam has come a cropper in the first weekend. The unusual strategy of not screening premiers has backfired bigtime and the film has turned out to be an outright disaster as it failed to collect the theatre expenses by the end of Sunday. The Sudheer Varma directional showed no signs of improvement in the weekend after taking a low start with $ 21K from Thursday. With Friday’s $ 17K and Saturday’s $ 21K, the film continued its disappointing run. As of this writing, Ranarangam collected close to $ 5K on Sunday and is likely to end up with less than $ 75K in the first weekend. 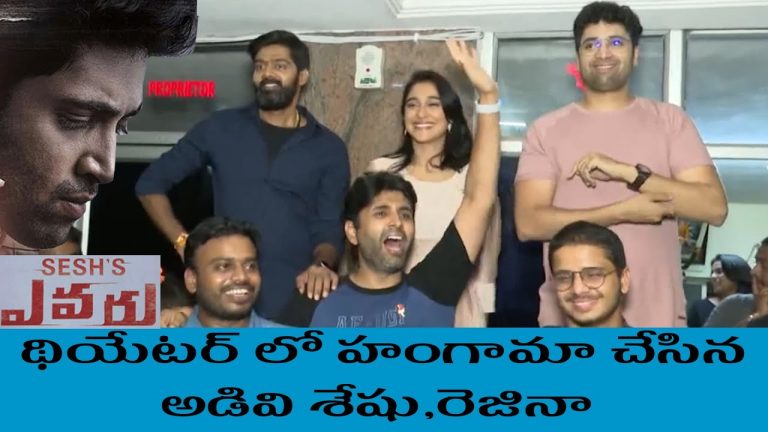 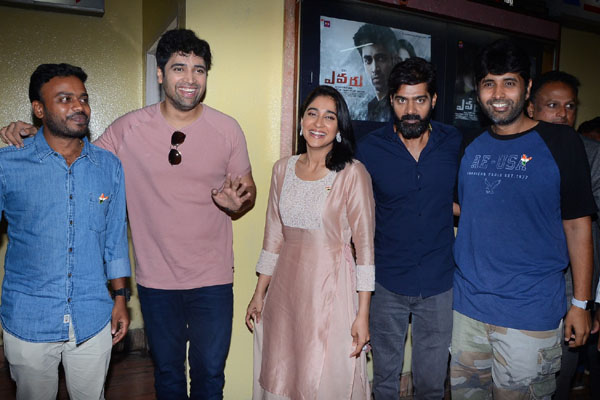 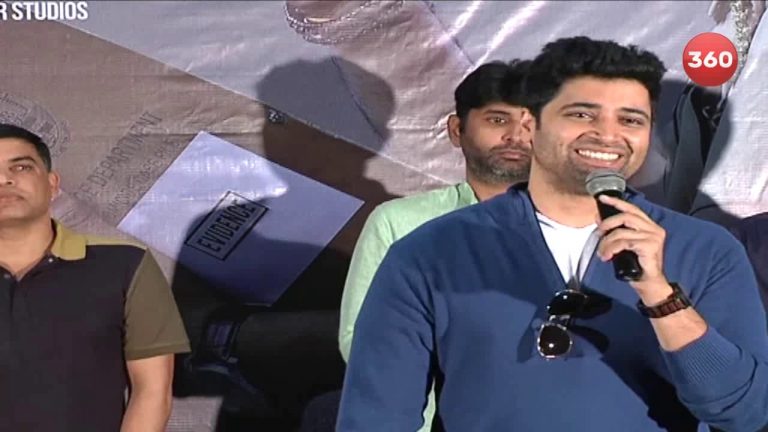 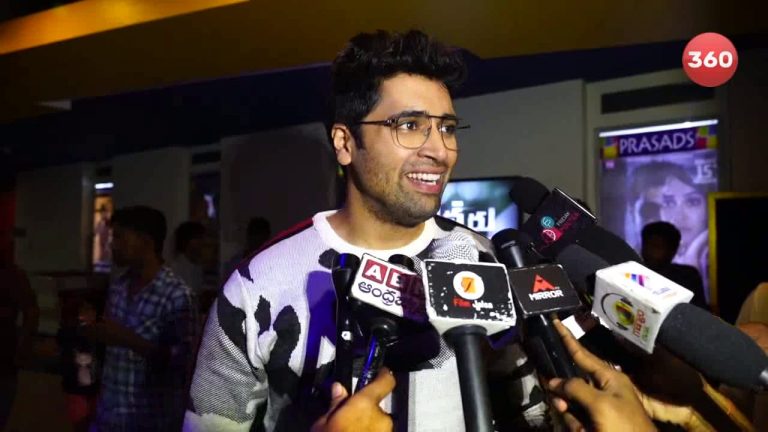