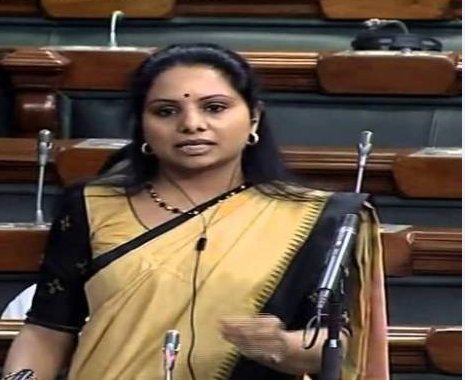 TRS Nizambad MPs Kavita on Wednesday directly attacked AP CM Chandrababu Naidu in Lok Sabha for the delay in the bifurcation of Hyderabad High Court. Dragging chief minister of a state  into a controversy and leveling charges against him is generally not the practice of House. However, Kavitha made a scathing attack on Naidu during  Zero hour in Lok Sabha sparking protest from Government.

Breaking the convention,  Kavita, not only referred to CM of Andhra Pradesh Chandrababu Naidu by name but also  accused  him of blocking the division of Hyderabad High Court, which was immediately objected to by urban development minister Venkaiah Naidu and law minister Sadananda Gowda.

For the past few day the TRS member have been agitating demanding immediate bifurcation of the High Court. Today also they raised the issue in Zero hour.  Participating in the reference, Kavata alleged that,” Andhra Pradesh chief minister Chandrababu Naidu is trying to rule Telangana through High Court.”

She said Naidu had always been the stumbling block for Telangana and now for the division of High Court. She also criticized centre for not cooperating in the creation of separate high court for Telangana state. Earlier, another TRS MP AP Jitender Reddy said T-government was ready to allot any premises to Andhra Pradesh to set up their own High Court in Hyderabad and they could stay put for ten years.

Speaker Sumitra Mahaja also disapproved of Kavita’s remark and advised her not level charges against chief minister of a state from the House.

Reacting to Kavita remark against Chandrababu Naidu, Venkaiah Naid took strong objection. He said taking reference to a person who was not a member of the House was not right. “Don’t talk like a child. You are not supposed to refer to somebody who is not a member of the House. If you don’t like I will ask law minister to withdraw his statement. Do whatever you like,” Naidu said angryly and sat down.

” In the bifurcation of the high court,  a political decision has been taken already. Implementation of decision is getting delayed due to practical problems involved,” he said.

Responding to the debate law minister Sadananda Gowda said center was committed to th  e bifurcation of the state. Protesting the remark of Kaviata, Gowda said, the matter was sub judice and could not dwell more on the subject. 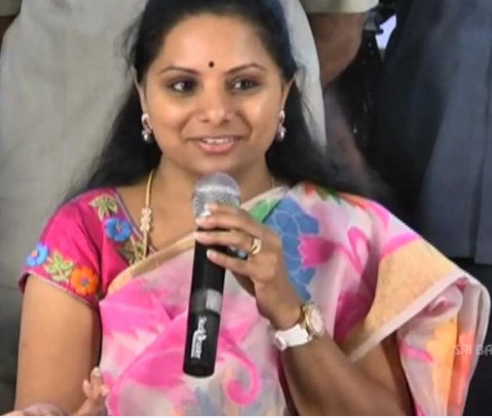 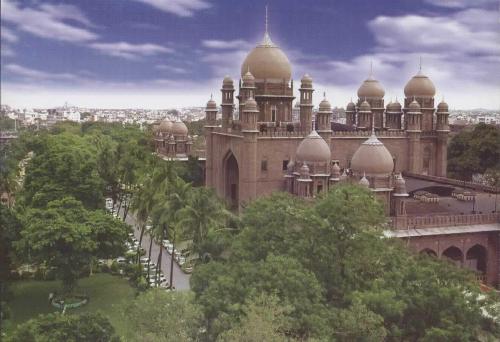 In a curious twist to the telephone tapping case, the Hyderabad High Court was informed that the Telangana government kept the centre informed about its plan to intercept certain phone number of Andhra Pradesh government functionaries.

So, it is clear that the tapping was done with the full knowledge of the NDA government in which the aggrieved party TDP government is partner.

According to the union government Telangana sought the permission of the Centre before intercepting the phone of some functionaries of Andhra Pradesh government.

This was revealed by additional solicitor general of India, Natarajan in the High Court yesterday when the petitions filed by TS came up for hearing. While arguing in support of interception of the phones by Telangana government, Natarajan said, Section 2 of Indian Telegraphic Act authorizes the governments to take control of the telephone lines of licensed telephone operators for interception. ” The state of Telangana had sought the opinion of the centre before intercepting certain telephone conversations and entire correspondence regarding the interception  is a privileged document. It can not be disclosed or forced to be disclosed  before a court of law,” Natarajan clarified.

Telangana government, which is opposed to the revealing of the call data as it would be violative of Telegraphic Act, filed petition seeking quashing of Vijayawada Chief Metropolitan Court order that asked telecom operators to disclose the call date of the phones they  tapped.

The bench of Justice Vilas V  Afzulpurkar said the petition was maintainable and ordered the Vijawada court to handover the sealed cover to High Court, and adjourned the case for four weeks.

Last week, the Supreme Court asked operators to furnish the data in a sealed cover to trial court.

After the hearing the arguments from both the sides against and in favor of furnishing the call data, the High Court  asked the mobile phone service providers to furnish the data to Vijayawada Court which  should be sent to the High Court through a special messenger by Vijawada court.

Eminent advocate Ram Jethmalani, who appeared on behalf of the Telangana government,argued that government had the right to intercept phone calls and asking for data from operators operating from another state was an attack on the state.